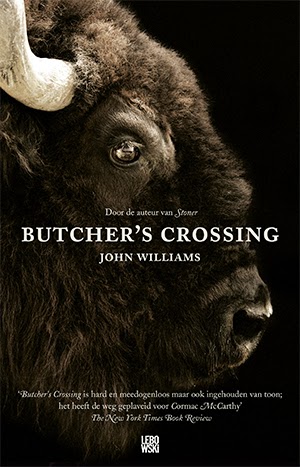 (possible spoilers)
Will Andrews is a very young man when he comes to Butcher’s Crossing. This is a small town that is waiting for progress to catch up with with. People hope that when the railway comes, the town will prosper. But when Andrews arrives, the town is the place for hunters, the men who hunt the bizons and sell the hides. Andrews wants to come with these hunters and explore the country, to do something that fall out of his normal routine as a Harvard student and son of a preacher.


A hunter, Miller, can be persuaded to take Andrews. Miller says he knows of a valley where there are still bizons and he helps Andrews to bring a crew together. The four men leave Butcher’s Crossing and hope to return before the winter with enough bison hides to make them all rich.


Things do not go according to plan, they do find Miller’s valley and are able to shoot almost all the bizons, but the winter catches up with them and leave them stranded in the valley for months. When they finally come back to Butcher’s Crossing in Spring, they find that time did not stood still and a lot of things have changed.


America was developing very quickly in the 19th century. The ‘frontier’, the border of the wild west moved westwards fast. The real ‘wild west’ was almost a thing from the past. Railways were constructed from one coast to another and the land was changed for good. The last living bizons are a reminder from the past, just like the hunters are an echo from the past. When the bizons are gone, there will be no more place for the hunters, and this moment is approaching soon.


When Will Andrews comes to Butcher’s Crossing, the west is almost won. This becomes clear when Miller spots a railway during their journey and remarks how he never thought they would manage to construct a railway up here.


In Stoner John Williams described a whole live, in Butcher’s Crossing not even a year out of the life of Will Andrews. But it is a significant year, Andrews realizes he can never return to his old live, his experiences have changed him forever.


Four men who shoot bizons, skin the hides and have to survive for months in horrible cold conditions in the valley while they do not speak a lot to each other. It does not sound like an interesting story when I sum it up like that, but I can assure you it most definitely is. John Williams is a master story teller, who can make this into a riveting and visual story. Each of the four men has his background story and every now and then you see glimpses of that story.
The surroundings and the landscape are very important, John Williams makes this a vital part of the story. He writes detailed, but certainly not boring, every word and every sentence is like it should be.


I really enjoyed Butcher’s Crossing, what a beautiful novel this is. I am very glad two novels by this author are rediscovered and published again, but it is sad John Williams is no longer alive to see how people love his work.