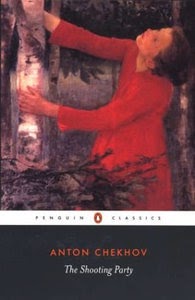 An editor gets a visitor who gives him a manuscript. The editor does not read it immediately, but when he reads it, he decides to publish it with his own corrections and remarks.


It is the story of a count who arrives at his estate again and asks a friend to visit him. This friend is Ivan Petrovitsj Kamysjev, the police inspector of the district. Kamysjev loathes the count but he visits him anyway and together with some other friends they engage in drinking and other things.


On the estate there is also a girl in red, Olga. Her father is the forrester who is mad. She marries Oerbenin, the count’s steward, but this is not a happy marriage. Olga falls in love with Kamysjev and has an affair with the count.


When everybody comes together on the estate for a shooting party, there is a terrible accident and Olga dies. She has been murdered, but by whom?


Anton Chekhov wrote this story when he was just 24. It is longer than most of his stories, it can be called a novella. It is sometimes described as a whodunit or a detective story, but that is perhaps not the best description. You know who did it almost from the moment Olga is dead.


Even at such a young age Chekhov was great at describing people, especially horrible ones like the count and Kamysjev. Kamysjev is not a nice or a good man, he drinks, he insults his friends and he is rude.


I found it interesting to see how different my opinion was on this story than on Madame Bovary. I read both books at the same time, but what bothered me in Madame Bovary, did not bother me in The shooting party. In Madame Bovary I was put of by the nasty people who did nasty things, without any moment of self-reflection.


I think the difference is, for me, that Kamysjev knows he is a bad person. He loathes the count because the count is even more debauched than he is, but on the other hand he cannot distance himself. Kamysjev recognizes the goodness in his friend the doctor or in Oerbenin and he is ashamed of himself and the way he treats them, although pride and weakness prevent him from chancing his behavior. He fell in love with Olga and idealized her, until he realized she was not the angel he thought her to be. He then resents her, even though he knows this is not fair of him, he is certainly no angel himself.


In short, Chekhov managed to make Kamysjev a man full of contradictions and a man you can feel sorry for, even though he has a bad character.


The shooting party is not just the story of a shooting party gone wrong, it is so much more. It is a tale about love, and goodness and badness and bad choices.
I really recommend it, it is worth reading, like all Chekhov’s stories are.