Nothing holds back the night, Delphine de Vigan 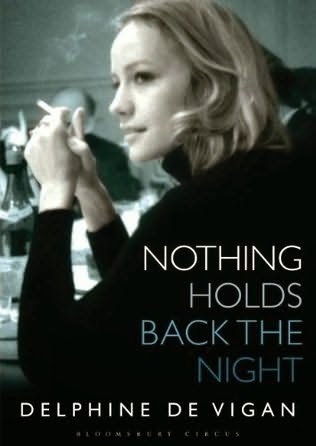 Delphine de Vigan is a French writer who has published several books. One day in January she finds her mother who committed suicide. Delphine decided to write about her mother’s life. She talks to all the aunts and uncles and other people who knew her mother, to get as much information as possible.

Lucile was the third child in a large family. Her parents, Liane and Georges were very fond of each other and with so many brothers and sisters there was always something going on. Lucile was an exceptionally beautiful child and had a career as a child-model, she was photographed for children’s clothing etc.

It seems Lucile’s childhood was not as carefree as it looked. Perhaps her rebellion when she was a teenager was already a sign something was wrong. Some members of the family, (among those a brother) killed themselves by shooting themselves in the head.
For Lucile there were years filled with depression and manic episodes, fueled by drugs, alcohol and familysecrets. Delphine and her younger sister Manon are witnesses and have to live with the consequences.

It is hard to write a family history, especially when the people you write about are close to you, like your mother. What makes it even harder is that everybody has their own version of the events and nobody likes it when his or her version is being questioned. This can make speaking with family members about events challenging.

It is not easy to hold your distance, as becomes clear in Nothing holds back the night. The first part, about Lucile’s childhood is told in a beautiful way. The later parts, where Delphine de Vigan is a witness and often victim of her mother’s actions, sometimes become lists of what happened, not much story telling going on there. This makes parts a little less interesting to read sometimes.

It does become very clear what influence your family and upbringing can have on your life and how it a psychological disease can make life difficult and unbearable. Not only for the people who suffer from it, but also for their familymembers, especially children.

On the whole I thought Nothing holds back the night a beautiful and profound book, although I personally thought the first part was better than the later parts.