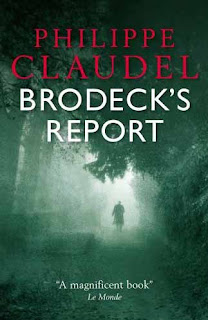 How do people react when fear takes over? What do people do when a stranger comes who holds up a mirror and shows them what cowards they are?

A group of people turning against a person cannot be controlled, all people in the mob feel safe, protected by the collective that makes sure no one is to blame individually.

The stranger, the person who does not belong is sacrificed for the greater good and people tell themselves that they really had no choice, it was him or they.

In a small town a murder is committed. Brodeck is asked to write a report about it. The murdered man was a stranger. In the beginning his arrival was seen with some optimism, but soon he made people feel uncomfortable with his questions and writing things down in a little notebook. What did he want, this strange man, why had he come to the village and who sent him?

Brodeck is asked by the village notables to write this report, to ask for witness-statements and come with an explanation. He cannot refuse this order, he himself is an outsider as well. Years ago when he was a little boy, he came to village and grew up there, but people never forgot he was not born there. During the war, this became painfully obvious.

When he writes his report, Brodeck also writes about his experiences in the camp he was during the war and what he had to do to survive.

Brodeck is always an outsider, as long as things are good he is tolerated, but as soon as things turn bad he is excluded again. That he returns to the village after the war is something else people do not like. He is a living reminder of their cowardice and they blame him for that.

Philippe Claudel never tells where or when the story is set, and normally this irritates me. In this case, it was no problem because the where (Alsace), and the when (just after WWII) becomes obvious quite soon, even when it is never explicit. But words like Jewish or Holocaust are also never mentioned, and it also becomes very clear that this is what the book is about.

Brodeck’s report is a story about fear, cowardice, survival, quilt and forgiveness. It is a story that grabs you by the throat and makes you feel ashamed about what people can do to each other.

Again, this is a beautiful novel by French author Philippe Claudel. Not with the poetic sentences I know from his previous books, but every sentence here is very precise and the sober way of writing makes an even deeper impact.

Brodeck’s report is not a book you can read quickly between other things, it has too much power for that. You need to give it time to fully sink in, because even when you close the book, the story stays with you for a long time.