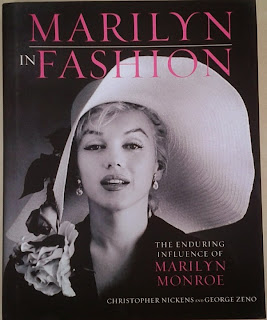 When we think about the style and fashion icons of the filmindustry, we probably think of Audrey Hepburn and Grace Kelly and not of Marilyn Monroe.

Yet, Marilyn Monroe wore clothes from several well-known designers and some of the dresses and outfits she wore have become iconic. She has also been a huge influence on the fashion designers of today.

This beautiful coffeetable book shows which designer clothes Marilyn wore and also shows how divers she was in the styles she wore. Ballgowns, cocktaildresses and casual were all part of her repertoire.
Sometimes these were clothes she bought, often it was something she could keep after filming and later in her career the designers were all to happy to design for her.

Marilyn was of the opinion that clothes were meant to make your body look good and to show your best parts, so she did not hesitate to alter a blouse or a dress to suit her better.
The writers of Marilyn in fasion are Christopher Nickens who wrote several Hollywood-biographies and George Zeno who owns the largest collection of photographs and memorabilia of Marilyn Monroe.

This book is full with photographs of Marilyn I never saw before, and that all show how very beautiful she was and how well she could wear anything, she seldom made a style faux-pas.
This books givers you new facets of Marilyn and giving you a better and completer image of this very special woman.
A book every fan should have.
Full title: Marilyn in fashion. The enduring influence of Marilyn Monroe.
Published in 2012