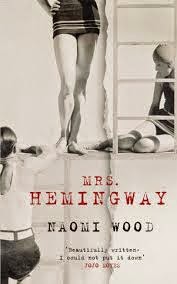 Ernest Hemingway was not an easy man. He always wanted to play the lead role and be in the center of attention. He also was a man who wanted one thing, but when he got it, wanted something else. This was certainly true for his marriages, as his four wives found out.

Ernest Hemingway’s first wife was Hadley Richardson. They lived together in Paris when Ernest was just a beginning author. Their marriage has already been the subject of the excellent book The Paris wife by Paula McLain.(HERE)
In Paris Ernest had an affair with Pauline Pfeiffer (Five). For a while there was an uneasy relationship between the three of them; Hadley knew about the affair, but hoped it would pass. Finally she consented to a divorce and Ernest and Five got married.

They lived in Key West and Five made sure the house and everything was in perfect order for Ernest. There was however one little problem, Ernest wanted more adventure and he left Five for the beautiful and blonde Martha Gellhorn who was twenty-eight at the time.

Unfortunately for Ernest Martha loved her work more than she loved him and in 1945 she asked him for a divorce. She was the only woman who left Ernest instead of being left. Ernest married Mary Welsh immediately after the divorce and she was his wife until he died in 1961.

Naomi Wood managed to give each of the women their own voice. She tells the story in four parts, told from the viewpoints of Hadley, Five, Martha and Mary. It begins when one relationship ends an another one starts, with flashbacks to the past. In this way she can describe the events from the viewpoint of each woman, giving a new dimension to what you thought you knew. She does this very well and manages to make the women come alive so you can understand their emotions and their actions.

Naomi Wood based this book on letters and biographies and little details give away how well she researched everything.

The question remains why these women, intelligent, kind and sometimes married to another man, fell for Ernest Hemingway. Was it the myth of the great writer, the man he pretended to be? I still do not have the answer, but it is very fascinating.
Mrs. Hemingway is a very well written and excellent novel and I enjoyed it very much.