The judgement of Paris, Ross King 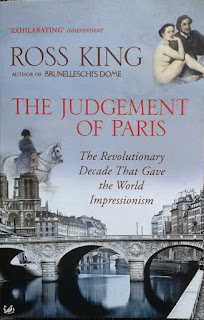 In the 19th century it was the Salon in Paris that decided what was good art and what was not.
A painting should have a historical or Biblical scene and should be painted with perfect details.

Each two years the Salon held an exhibition and if you wanted to sell your work, you had to get your works shown in the Salon. Unfortunately, the Salon-jury was very strict in their opinion and refused many works they thought did were not up to the standard.

Ernest Meissonier was one of the most famous painters in France. He was known for his detailed perfection, his love for history and his disdain for modern times. He was rewarded for this attitude by having his paintings in the Salon year after year, he won many medals and was able to ask high prizes for his work.

On the other side was Édouard Manet and he wanted to paint in a new fashion. He wanted to paint modern scenes and not restrict himself to the conventions of the Salon. His works like Dejeuner sur l‘herbe or Olympia were not just ridiculed, but detested.
In The Judgement of Paris (beautiful title, by the way, with so many layers)
Ross King describs how Manet tried to get his works into the Salon from 1863 without much success, while Meissonier had triumph after triumph.

Slowly the climate changed. Manet’s friends like Monet, Degas, Renoir and Cézanne saw him as an inspiration and took painting even further away from the Salon. They began to paint in the open air and lost most of the details, but tried to capture the moment.

The rigid rules of the Salon were met by more and more criticism and painters who got refused even had their own exhibition a couple of times (Salon des Réfusees) and the rules became a little less strict.

Nowadays we see the paintings by Manet and we admire his works, his new vision and his courage. We also see the influence he had on the painters who came after him.

Ernest Meissonier is almost forgotten by all of us and if we see his paintings now, we can admire the technical perfection, but the painting itself does not move us anymore.
The judgement of Paris tells the story of two painters, who each stand for a movement in art in Paris in the second half of the 19th century. We get to know both Meissonier and Manet, learn how much preparation went into one of those historical paintings, understand the frustration that Manet felt every time one of his paintings was refused or ridiculed. In short, these two painters, both so different, come to life for us.

Ross King, who also wrote Brunelleschi’s Dome, managed again to write an engaging and well written story that does not shy away from technical details, but that also brings Paris in the 19th century and the artworld in those days to life.
Very well done.