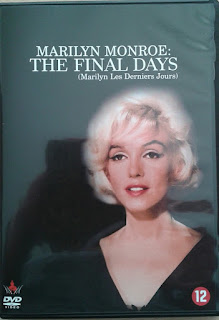 In 1962 the moviestudio 20th century fox wanted a movie that would bring in money fast. They were in serious trouble since the filming of Cleopatra in Italy was a mess thanks to Elizabeth Taylor.
The studio asked the biggest star they had, Marilyn Monroe, to film a success.

The movie, Something’s got to give, was based on a movie from 1940 My favorite wife.  The story is fairly dumb, a man thinks his wife has drowned, has her proclaimed dead after five years and marries another. That is the day his first wife comes back. Marilyn Monroe played the first wife, Dean Martin the husband and Cyd Charisse the second wife.

The filming was not without problems. Marilyn had not done a film for 20th century fox in two years and the project seemed to be doomed from the start. The director George Cukor was not happy about working with Marilyn and did not even bother to show up for her first costume fit and try out. There was also hassle with the script, the producer and the writer. And worst of all, Marilyn was seriously ill and the studio doctor advised to postpone filming. The studio however did not want to lose more time and demanded the shooting would start immediately in April 1962.

Marilyn called in sick regularly and at first this could be solved by shooting the scenes with the other actors first. But finally her presence was required. The studio also did not like that she went to New York to sing at the president’s birthday party, although they had given her permission.

Finally the studio had enough and fired Marilyn. She began a charm-offensive with the press and the photographers and in the end she was hired again. Some concessions were made, she could no longer bring her acting coach Paula Strasberg on the set, and the director was replaced.

Despite this the film would never be finished, because in August 1962 Marilyn Monroe died.
The final days  is a documentary from 2001 that focuses on these last months and the trouble with this film. There are beautiful images of Marilyn Monroe, I truly think she never looked as beautiful as she did in those days.

There are also interviews with the people who knew her and who worked on that film. The tried to make it non-sensational and balanced and I think this has worked very well. Although it is quite shocking to see how some people still try to say they did nothing wrong (like her doctor).

The last 20 minutes of the DVD are the scenes that were filmed and that were rediscovered in the archives of the studio. The story is silly, but it does show that Marilyn was not a bad actress at all and if she could have finished this movie, it may have be one of her best ones.

Marilyn Monroe, the final days is a beautiful and very interesting documentary about the last movie Marilyn Monroe made and worth watching for every fan.
film/television history