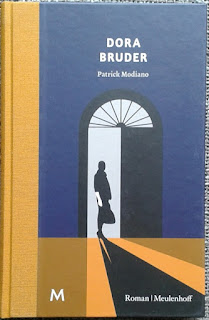 A little add in the newspaper catches the attention of Patrick Modiano. It is a newspaper from 1941 and the add is about a 15 yo girl who ran away.
People are asked to give information to an address in the north of Paris where her parents live.

In the next years Patrick Modiano tries to follow this Dora Bruder. Where was she, did she return home and what happened to her?

What follows is a report of the facts he managed to find. Dora Bruder was a Jewish students at a catcholic boarding school and one night she ran away.
We never find out why and where she was all those months also never becomes clear.

We do know that the German occupiers came with more and more rules against the Jewish population of Paris, and Dora and her parents fell victim to those.

This book is hard to place in a specific genre. It is both a novel, an account, a detective and memoires.
On one hand it is non-fiction, but Modiano always remembers he is a writer and even when he writes about his own experiences you never know for sure what is real or where he makes himself into a character in his own novel.

He is known for naming places and dates, but at the same time he can also manipulate these facts and change things when he wants to.

As usual Patrick Modiano realizes that time moves on and people can disappear. That also goes for places and buildings, houses are demolished, new roads are built and before you know it there is nothing left of the things that once were.

We know a few things about Dora, and only because she was arrested and that makes the quest for her very sad. We knew we will never find her marriage announcement or something like that in the papers.

Really sad is the fact that Dora might have had a chance to survive the war, but by running away from the conventschool, she also gave up the relative safety this could offer her. During the war many convents hid Jewish children from the Nazi’s and tried to protect them.

Many things stay unclear in Dora’s life. We do not know where she was or what she did when she ran away. Just a few sparse facts are all Modiano could find, the rest is speculation.

This may sound like Dora Bruder is a thin story, but Modiano manages to give it body with the account of the other things he also finds, about other people during the war, and all of this makes a very simple, but poignant story.
.
Patrick Modiano links Dora Bruder’s life to his own life. He remembers the places where she was from his own childhood, but also the parallels in their lives since they both once ran away from their parents. He seems to feel a connection with this girl, separated from him by death and many years. She is also a symbol of a time, a life and a Paris that is gone and will never come back, just like so many people never came back.
The last time I was in Paris, I went to the address where Dora Bruder and her parents lived, Boulevard Ornano nr 41. The house is still there and this house, together with this book, are the only things that will remember Dora Bruder’s young life.