The art of rivalry, Sebastian Smee 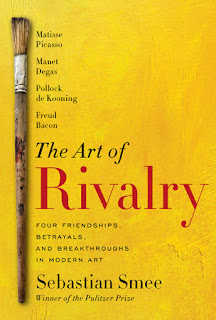 An artists never works alone, he is always influenced by other artists before him and in his own time. The importance of friends for an artist must not be underestimated, as this wonderful books demonstrates.

These artists help eachother along, to see new things and to grown in their art.

Freud would not have dared to paint in the way he did without meeting Bacon, Degas was copying old masters when he met Manet and began to see the modern world, Picasso would not have painted his Demoiselles d'Avignon without the rolemodel Matisse was to him and although Willem de Kooning was a brilliant artist, he was also stuck before he met Jackson Pollock.

The friendships do not all last a life-time, and the breakups are sometimes very hard. Although, when the frienship is over, there is often also a sense of loss and grief.

Often, the rivalry between two artists is also fuelled by the other friends, who make more of the rivalry then there really is.

The art of rivalry is very interesting. It focusses on the friendships of course, but also gives a lot of background about the artists and the time they lived. It is well written and often very funny and almost gossipy, packed with amazing details and anecdotes.

If you are interested in (modern) art, I really recommend this book, because after reading it, you will want to read more about these fascinating artists.