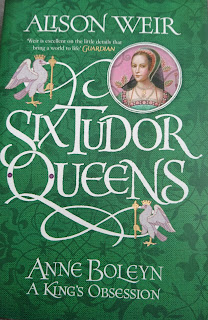 Ever since I was about 12 years old, I have been fascinated by the story of Henry VIII and his wifes. The historian Alison Weir is working on six historical novels, one for each of the wives. Last year Katherine of Aragon was published and now Anne Boleyn.

Anne Boleyn has been many things to many people. For some she was a feminist, for other a protestant saint, for other the whore of Babylon. The truth, as always, must be somewhere in the middle.

There are many things we do not know, but in a novel a writer can do things she cannot do in a biography. Blanks can be filled in and guessing is allowed.
Alison Weir knows her subject very well and this shows.

Anne Boleyn was a girl whose ambition was woken when she spend time at the courts of two formidable women, the educated Renaissance court of Margaret of Austria, who was regent of The Netherlands and the elegant court of the French princess Margueritte.

Back in England Anne stood out because of her elegance and her wit and soon she caught King Henry's eye.

Anne must have thought that if she could marry him, she would be a queen in her own right, and she could rule as her rolemodels did. Only she forgot that while a mistress can flaunt the rules, a Queen must follow protocols.

After six years of bickering, several good men who were sent to the block and a country in uproar, Henry had had enough. And worst of all, Anne failed to deliver him his son. He needed to get rid of her, and in a better and swifter manner than he had done with Katherine.

Some forged charges were brought against Anne and she was sentenced to death. Henry was now free to marry another.

Was Anne a kind woman? No, I do not think she was. She was ruthlessly ambitious and she treated young Princess Mary very badly. She also encouraged Henry to be cruel to Katherine, even when she was very ill. Only when her own position was in danger, Anne turned to good works and religion to improve people's opinion of her.

But still, she was treated unfairly by Henry and the courtcase against her was completely bogus.

Alison Weir managed again to write a book so engaging you cannot put it down. I read the more than 500 pages in just 1 1/2 days because I loved it so much. I cannot wait for the next book.
books history