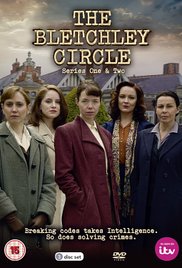 Since last week I finally have Netflix. I think I must be one of the last people in the world to get Netflix, but I am sursprised by the diversity of the series and films they have.

I already saw The Crown and loved every minute of it, but I also discovered another series that I thought was really good.

The Bletchley circle is set in 1950. It is about four women who worked at Bletchley Park during the war, meaning they were working as codebreakers trying to crack the German codes to get information. This work was secret and they were not permitted to speak about it during the war of afterwards.

Then in 1950 women are murdered in London, and one of the Bletchley girls, now a wife and mother, sees a pattern. The police is willing to listen to her in the first place, but when it turns out she is wrong about the finding place of the next body, they do not take her seriously anymore.
Susan then brings the different colleagues together from Bletchley and together they work out who the murderer is.

First of all, the four women are all different characters and are well written. Each one of them has their speciality, Susan (Anna Maxwell Martin) is good at seeing patterns, Millie (Rachael Stirling) has a knack with maps and languages, Lucy (Sophie Rundle) has a photographic memory and Jean (Julie Graham) is the organiser.
Secondly, the atmosphere of the fifties is really done very well. The furniture, the clothes, but also things like rationing and how the war was still very much a vivid memory for most people is realistic and feels true.
These four women have a difficult position. They played an important role during the war, but nobody knows what they did and how intelligent they are. Susan's husband is nice, but he, (and most of the people in those days) cannot imagine how any woman would want something other than being married and being a mother.
The actresses are good, as is usually the case in a British costume drama! (can I say how much I love Rachael Stirling?) I also like very much how they react to the crimes. In most detectives there is almost a casual feeling when a corpse is discovered by a civilian, as if this is not a traumatic event. In this series the women are shaken up and upset and have very human and understandable reactions to what they discover. But this does not stop them.
I love the clothes and the hairstyles and they feel very true to the timeperiod as well. (although I did not like Susan's hairstyle, it is very ugly).
Millie especially has amazing clothes, she is a bit more glamarous than the others!
The murder cases are also well done, not over the top gory, but with enough suspense and surprise.
There are two seasons, the first season has one story told in three episodes, the second season has two stories, told in two episodes each. It is a shame there is not third series, because I would have liked to see a lot more of these amazing clever women!
If you love British drama series, and a murder mystery, try to watch The Bletchley circle. I do not think you will be disappointed!
film/television history