Before the fall, Noah Hawley 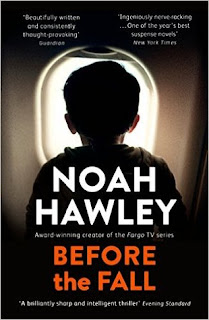 Sometimes something happens and a lot of people are involved in that situation. Their lives came to the point where they met, coming towards point zero. The interesting question is how they all came to that point and could it have been avoided?

In Before the fall a little private plane crashes. Two people survive, the others, passengers and crew, are all dead.

Scott is a painter who never had a lot of success, but now fate is smiling at him. His agent wants to talk to him and there is a chance of an exhibition.

A friend of his, Maggie Bateman, invites him on the plane with her family, because they are also leaving for New York.

But just a few minutes after take-off, the plane crashes into the sea. Scott and the little Bateman son survive and Scott manages to swim miles to the shore with the little boy on his back. He saved the boy and is a hero.

Only people want to know what happened and why the plane crashed. Was it something one of the crew-members did, or was it a terrorist act? David Bateman owned a right-winged news-channel and his prime anchorman is looking everywhere to put the blame, and he focusses his attention on Scott.

But it could also be the fault of the other family on bord, the Kiplings. Because Ben Kipling was a millionaire who made his money by never letting moral stand in the way of a good deal and whose trading with enemy countries was under investigation.

I loved the character of Scott, who is an artist who makes very interesting paintings and the descriptions of some of this paintings add another layer to the story. I think you can say that greed and having no moral and no heart is put against a person who tries to be a decent man, even after he finds himself in a situation he can almost not control.

I read this book on my way to Nice, (not the best thing to read while you are in an airplane), but despite that little thing I really enjoyed this book. I thought the different lives were well written and it was very interesting to see all those choices that made them reach point zero.