December 15, 2017
Last Summer I finally got Netflix and I immediately watched the first season of The Crown, the series about the reign of Queen Elizabeth II of England.

I loved this series more than I ever thought I would. I loved the attention to detail and the slow pace it took. This was not a rushed series, but a careful and beautiful showing of a very interesting part of 20th century history.

Of course, they made some mistakes, but on the whole I think it is very well done.

On december 8th, the second season was released and I watched every episode in one weekend. And I also loved this new season. 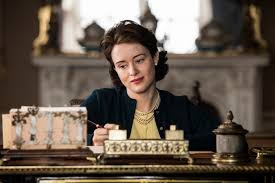 I also like how this show gives you a little bit more insight on why certain things were done in certain ways. I now have more sympathy for prince Philip for example, now I know more about his background.

I also began to like Lord Mountbatten very much when I saw how much he supported a very young prince Charles who miserably failed to please his father.

And the background story of princess Margaret is also very interesting, I did not know much about her, and although she is not a nice or very kind woman, I do feel for her.

The episode about the past of abdicated king Edward VIII was very interesting, and also a little bit heartbreaking. You can fully understand how empty his life is and how much he wanted to play another important role. Or at least have something useful to do. And of course, when his past became known, this could never happen.
Very well done is how they show how Britain changed and how the royal family also had to change.

Where there bad things? Yes, the episode with the Kennedys was in itself a good episode, I just hated the actors who played John F. Kennedy and Jackie Kennedy. They were terrible.

The only problem is with a series like this is that I want biographies about almost all the characters. Last series left me with the biographies of Edward VIII, Wallis Simpson and Princess Margaret, right now I have books about Anthony Armstrong-Jones and Lord Mountbatten in my shopping basket. A series like this is bad for my wallet!