February 20, 2018
Lately I saw three French films that I though were absolutely brilliant!

La Danseuse (2016)
Loie Fuller was an American danser who came to Paris around 1900 to dance at the Folies Bergere. She experimented with a new way of dancing, using her dress and a new way of lighting. She was an inspiration for a new generation of dancers like Isadora Duncan.

La danseuse is not a very good biopic since it make quite  a few mistakes, but if you take this as a film showing how hard a dedicated artist works at her performance, it is a very good film. The dances are filmed very beautifully and it is easy to see what a visionary Loie Fuller was and how modern and new her dances were. Very interesting! 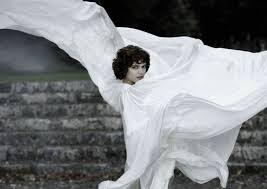 Le fabuleux destin d'Amelie Poulain (2001)
I know I am very late to discover this movie. I think the whole world must have seen it before I did, but this was one of those movies people raved about it and somehow I always got the idea I would not like it. So I never tried it. Until last week. And I loved it. I absolutely loved it.

I liked the quirky humor, the funny moments of looking or speaking into the camera and most of all, I loved Amelie! Audrey Tatou is beautiful to look at, but also captures the frailness of Amelie.

I really liked how she managed to interfere with the lives of her neighbours, and I am glad she ended up finding love. And Paris is amazing as well.
I cannot believe it took me so long to discover this film! 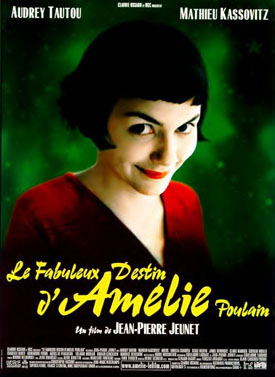 La vie en rose (2007)
When I was a child, my parents had a record of Edith Piaf and as a child I was captured by her voice. I did not know much about her life, but what a sad life it was! Growing up almost on the streets, having to sing for money and when she was discovered as a talent it did not improve much. She drank a lot, she lost her daughter and the love of her life Marcel Cerdan (a boxer who died in a planecrash) and finally died at the age of only 47.

La vie en rose tells her story, not in a very linear way but in impressions of her life. Marion Cotillard is Edith Piaf and does a marvellous job of portraying one of the best singers France ever had. The only thing they did not cover in the film was her work for the resistance during WWII, but perhaps that would have made the film too long.

I cried during the last moments of the film, when Edith performs Je ne regrette rien for the first time, such a powerful performance. I think this is one of the best biopics I have ever seen. 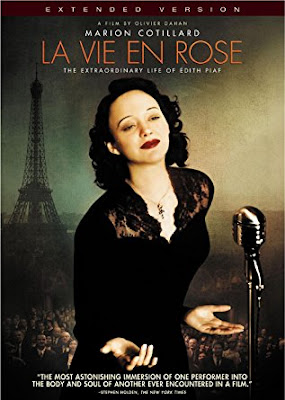