May 21, 2018
Michelangelo Merisi da Caravaggio is for me one of the greatest painters who ever lived. He lived in Rome, but in 1606 he had to leave and went to Napels. Here he was asked to paint new works, and three of these paintings are still in Napels.
When I was in Napels a couple of weeks ago, I knew I wanted to see all three of them. So this week I will show you which paintings I saw.

Day 2, first painting
On my second day in Napels I first set out to find this painting, which was not far from my hotel. 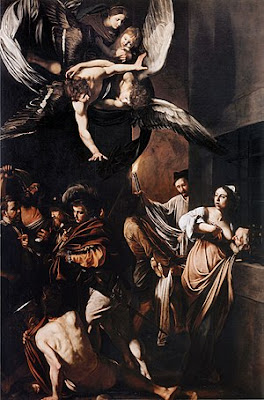 The charity foundation Pio Monte della Misericordia commissioned this painting. The first idea was of seven different paintings, but Caravaggio combined all the works of mercy in one painting.
The seven works of mercy are:


A lot is happening in this painting. On the right you see a woman who breatfeeds a man in prison. This may seem a bit strange, but it is based on a story of a young woman who helped her imprisoned father in this way and saved him from starvation. On the right you also see a dead man being caried away. On the left you see Saint Martin of Tour cutting his coat in half to help a naked man on the street, Samson who gives water to a man and a stranger asking for shelter, combining all the works of mercy.

The angel above inspires all the mercy and good works.

The work is absolutely magnificent. Caravaggio is a master of scenery and light. I love how this work is still hanging in the same place as it was commissioned for; the chapel of the foundation. 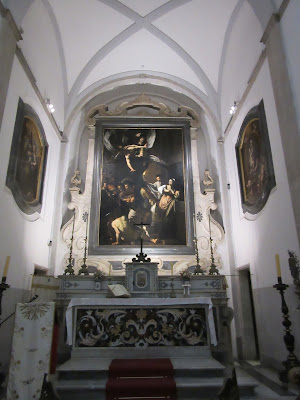 There is also a lovely museum with other artwork and the best part here is a view from the balcony above on the painting in the chapel.