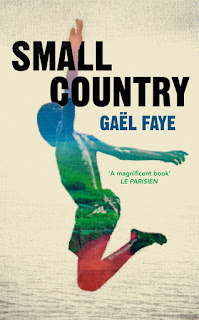 Gabriel lives with his family in Burundi. His father Michel is French and his mother Yvonne is a Tutsi from Rwanda. The family is well off and lives in a good neighbourhood in the capital, surrounded by other expats.

Gabriel, or Gabe as he is known, enjoys his childhood. He is ten years old and liked to play football with his friends, or visit family friends in Zaire. He has a penpall in France and he writes her that he would like to become a mechanic someday, so he can repair things.

But not everything is a good as it seems at first. The marriage between Michel and Yvonne is getting worse and they seperate, and Gabe and his sister Anna stay with their father.

The difference between their relatively rich situation and the poverty that surrounds them also becomes very clear in some situations. And of course the political situation is not very stable. When a political party wins the elections, but does not have the backing of the militairy, Michel knows something will happen.

And soon after there is a militairy coup and the racial tensions between different groups, like the Hutu's and the Tutsi's grow, just like in the neighbouring country of Rwanda. Old scores are settled with a machete and the government does nothing to prevent it.

Small country is written by Gael Faye, who is both French and Rwandese. He grew up in Burundi and then in France and after working in the financial sector, changed to making music and now writing. He lives with his wife and children in the capital of Rwanda.

I really enjoyed this book. I read it a couple of weeks ago in Dutch, but there is now also an English translation.

It is well written and I like how Gael Faye wrote Gabe. It is very authentic, as a ten year old boy who is intelligent and sees a lot, but also does not understand everything that happens. Sometimes he crumbles under peer-pressure and makes bad mistakes. But he is very lucky with his neighbour mrs Economopoulos who gives him boosk to read and teaches him how literature can be a solace and a place of refuge.

Despite the horrible events this is not a sombre or depressing book, nor is it gruwesome for the sake of being gruwesome.
The humour makes it light and very readable, as does the heartwarming main character.