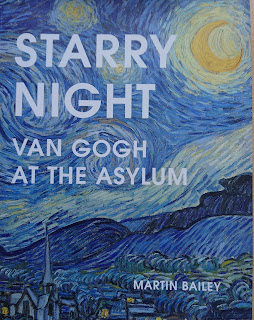 In 1888 Vincent van Gogh moved to Arles, a town in the south of France. He lived in a yellow house and hoped to form an artist colony here. Unfortunately the only one who came was Paul Gaugain and although the two painters painted together, they also had terrible rows.
Vincent van Gogh ended up with some kind up psychotic episode and cut of half of his ear.

He could no longer live in Arles, and in May 1889 he was moved to the asylum of Saint Paul in Saint-Rémy. He stayed here as a voluntary patient and could make walks outside the asylum. He even visited Arles some times.

Vincent would stay here a little over a year.  He had an extra room he could use as a studio. He painted a lot during those months, an average of one painting every two days. About 150 of these paintings and drawings still exist, others have been lost.

Because Vincent had no contact with other painters and artists, he developed his own unique style, not influenced by anyone.
His brother Theo, who had just married with a baby on the way, loved these new paintings. Vincent got good reviews in the newspapers and there were a couple of exhibitions where his works were shown. People liked his work.

Unfortunately Vincent had four serious relapses in the asylum and he felt that being there would not help him get better. He left to meet his brother and his new little nephew (he painted the beautiful almondblossom for his nephew) and arrived in Paris in May 1890. A few days later he left for Anvers, where he would kill himself almost two months later.

Martin Bailey knows what he is writing about when it comes to Vincent van Gogh. He wrote several books and helped put exhibitions together.
In Starry Night, he focuses on the year Vincent was at Saint Paul. He found old archives and is one of the few people who saw the actual room Vincent stayed in.

He wrote a marvelous book that does not only tell you all about how Vincent lived in the asylum, but also about his fellow patients, the paintings he made etc. There are beautiful pictures in the book, of these painings, but also old photographs etc.

Starry night is a beautiful looking book, with a very interesting story. A must for everybody who wants to know more about one of the greatest Dutch artists who ever lived.