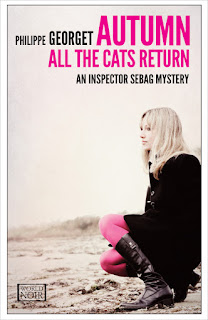 In September I blogged about the new French detective series I discovered by Philippe Georget and I reviewed the first book: Summertime and all the cats are bored. (HERE)

I have now read the two other books as well and I can really recommend them.

In Autumn, all the cats return Inspector Gilles Sebag from the Perpignan police must solve a crime on an old man. Written on the wall are the letters OAS, linking the murder to the war in Algeria. The members of the OAS (Secret Army Organisation) were against independence for Algeria. Both sides committes atrocities.

But how can you get information when nobody wants to admit they were once a member of this organisation? And is the murder really connected to Algeria, or is this just a decoy?

I liked the historical background in this book very much (the Algerian war interests me) and I like how the story was told, it was gripping and very good.

In Crimes of Winter Inspector Gilles Sebag finds out his wife has cheated on him. He must now work out if the wants out of a marriage of twenty years, or perhaps they can come out stronger together. Things are not made easy by a poison pen in Perpignan who is writing letters to people to inform them their spouse is cheating on them, with all the drama's that follow.

And since the best man in the policeforce is not at his best, it takes the police a while to connect the dots.

I found this story was not as good or interesting as the previous two, but it is still a good dectective. I like the colour locale of the setting in the South of France and I like how Inspector Sebag is not a one dimensional character.

There are moments I like him and there are moments when I think he is a jerk. And the same goes for the other characters. Nobody is completely black or white, but there is a lot of grey. And I like that.

So, I am looking forward to the last book which has not been published yet and I think it will be set in Spring. (In Spring, all the cats are happy?)
books France