March 10, 2020
Beside my own country, I love two other countries; France and Italy. I love their literature, food, history, films and all other aspects of the culture. So it is no surprise that I mostly go on vacation in a French or Italian city and that I read mostly French and Italian authors and watch a lot of French and Italian films.

At this moment I am emerging myself in all things French. I am still working on my French lessons, and to practise I also write my diary in French. It is full of mistakes of course, but it helps me to think more in French, something that I need if I want to learn the language.

In the past weeks I have seen a couple of beautiful French films, like Les uns et les autres and Dialogue avec mon jardinier. 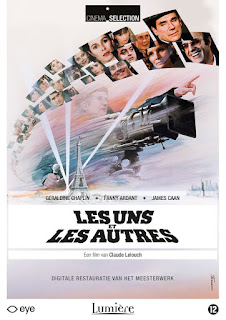 Les uns et les autres is a film I watched thirty years ago and it made a huge impression on me. It was never brought out on Dutch DVD, and I never saw it again. But now there is a new and digitally restored version with Dutch subtitles and from the first moment I saw it, I was hooked again. It tells the story of four families in three periods of history.

You have ballet-dansers in Russia, a classical pianist in Germany, a couple of musicians in France and a bigband-leader in the US. All these lives connect during WWII, the sixties and finally in 1980 when there is a huge charity concert for the Red Cross and everybody is involved somehow.

It is an amazing film by Claude Lelouch and it is one of my favorite films of all times. And I am so happy I finally have it on DVD!

Dialogue avec mon jardinier is one of the most charming films I have ever seen. It is the story of a friendship between an artist from Paris and his gardner, and the gardner has a lot of wisdom between the talk about the courgettes and the leeks. Uplifting and heartwarming. 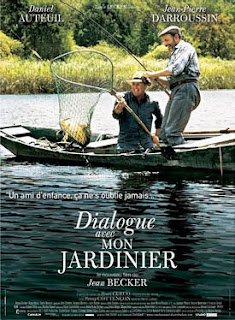 And books, let's not forget the books. I have a whole stack of new novels by French authors waiting for me and I love reading these beautiful books.
Some of them have been translated into English, but not all of them.

Read recently:
- Encre sympathique, Patrick Modiano (already mentioned that two weeks ago)
- Conversations with my gardner, Henri Cueco (the film was based on this book and the book is also amzing and very beautiful)
- Away with Eddy Bellegueule, Édouard Louis, moving and strong story of a young boy who grows up in and atmosphere of poverty, alcoholism and violence in the north of France and who has it very difficult because he is gay. 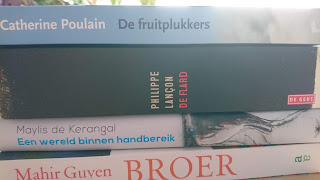 - Le coeur blanc (not translation into English yet), by Catherine Poulain. She also wrote Open sea and this new book is about the people who pick the fruit and the harvest and travel from village to village.
- Disturbance, Philippe Lancon, this man survived the attack on Charlie Hebdo and this is the story of how he experienced it and his road to (relative) recovery. I think this will be an impressive and moving read.
- Au monde à portée de main by Maylis de Karangal (not translated into English yet), a beautiful story it seems about an artstudent and her life.
- Older brother, Mahir Guven, the story of an older brother who is a cabdriver, and his younger brother who went to Syria to fight. But then his younger brother will come home again.

Four amazing new novels to dive into and to let them transport me to new places, different times and interesting people.
books film/television France personal