In the past weeks I saw two films and only when I finished the last one, I noticeds the silimar subject. Both were films about female authors I like, namely Virginia Woolf and Daphne du Maurier, and both films was about their romantic relationship with a woman. So, I decided to combine these two in one blogpost. The first film I liked, but I did not love it and the second one was very good. 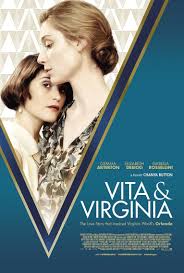 This film is about the author Vita Sackville West who is a populair author, but not very well respected. She is an open marriage with Harold Nicholson and is infamous for her lesbian affair with Violet Keppel.

Now it is 1922 and Vita longs to be taken seriously as an author. She is thrilled when she gets invited to a party with the Bloomsbury group and when she meets them, she falls in love with Virginia Woolf.

Virginia Woolf is respected and a serious writer, but not a populair one (Mrs Dalloway would be her breakthrough) and she is shy and awkward in public.

These two women get involved and will have a relationshop for the next couple of years. Vita is good for Virginia in the sense she helps her get more confidence and get over the trauma of the sexual abuse by her stepbrother.

I watched the film, although I must admit I am not a huge fan of Vita Sackville-West (truth be told, I dislike her). In this film I disliked her even more.

There is a lot to be enjoyed, like the costumes and parts of the story. I really liked how they visualize the visions/dark thoughts Virginia has, this was done very well.

So in short, did I hate it? No, but I am afraid it is not as good as I had hoped. 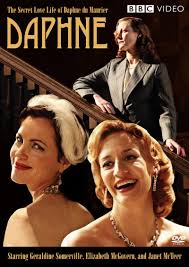 Daphne du Maurier was a complex woman. Extremely private, she felt most at home in het house in Cornwall, writing her new novel.

In 1946 she had to go to the US, because a woman accused her of copying Rebecca from her novel. During this trip Daphne fell in love with Ellen Doubleday, the wife of her host. Daphne had loved like this before, but when she married she thought all these feeling were buried. Ellen, although a great friend, is not in love with Daphne and makes this very clear. She does not mind if Daphne loves a woman, but she herself is straight and does not like woman that way.

Daphne goes home and writes a play about a forbidden love, and it is actually about Ellen. The lead role is played by actress Gertude Lawrence and at first Daphne hates her for not being Ellen, but in the end she does fall under Gertrudes spell and the two get into an affaire.

All this time she still hopes Ellen will also come to her, but Ellen is clear and firm, friendship is all that she can offer.

This was an excellent movie. The three lead characters are played by very good actresses, Geraldine Sommerville is Daphne, Janet McTeer is Gertrude and Elizabeth McGovern is Ellen, who all make their character come alive completely.

I loved how mature and wise Ellen was, she knew herself very well. Compared to her Daphne is sometimes a bit like a petulant child, angry she does not get what she wants. The scenes in Florence make that very clear and are somehow very funny!

A lot of the dialogue comes from the letters from Daphne and the things she said, as we see published in her biography by Margaret Forster. This makes it very authentic.