A portrait by Whistler 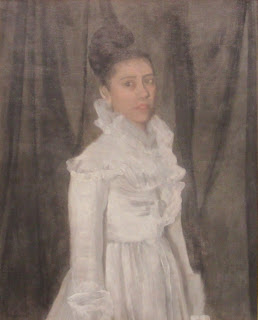 James Abbott MacNeill Whistler (1834-1903) was not an easy man, he was arrogant, picked fights with his friends and did not hesitate to drag a critic of his work to the courts.

He was also a very talented painter who started as a realist, but soon became known for the way he used colours. He took inspiration from everyday life and emotion was more important than perfect details. He took a lot of inspiration from Japanese drawings, that had become popular in the 19th century in Europe.

Whistler often gave his paintings names of musical pieces, like a nocturne or an arrangement or a symphony, because Music does not describe and then it is left open for interpretation.

His work was both hated and admired. Works were refused both by the Salon in Paris and the Royal Academy in London, but sometimes a painting did get in.
His portraits in full length were admired and also gained him commissions.

With the Falling rocket Whistler seemed to have bit of more than he could chew. The famous artcritic Ruskin accused him of defrauding the public by just throwing some paint on the canvas. Whistler took Ruskin to court for this and won, but the process left him bankrupt. He immediately went to Venice, where he could get a commission.

A friend and an artdealer went into his studio and took the paintings that were left there, to see if he could sell them. One of these works was Symphony in white, girl in musselin dress. This painting ended up in the hand of Mr and Mrs Singer, who were building an art collection in The Netherlands.

When their private collection became a museum in 1956, the painting by Whistler was one of the highlights of the museum. Only shortly after there were doubts if this really was a Whistler. The seize of the painting did not fit and other things also did not add up. The painting was moved to the depot and never taken out again.

Until recently. A new investigation was done, looking at the techniques and the material. The result of that investigation is that it is indeed a painting by Whistler.
The paint that was used was the same Whistler used, and the technique of layering very thin layers of paint also matches.
The discrepancies with his other works can be explained by actions of the art dealer who took the painting. He cut it up to a smaller size so it could be sold quicker and he had somebody else paint the background, since the painting was not finished when he took it. But the girl in front is undoubtedly by Whistler.

The Singer museum in Laren is very proud to say they have a Whistler in their collection (again). They have organized a small exhibition with the painting, and two other paintings they have borrowed from other collections (one from Amsterdam and one from Glasgow). There you can also see what the investigation brought to light.

Last Saturday we went there and also listened to a lecture about Whistler, very interesting I can say! The lecture was a one-time event, but the exposition of the Whistlers can be seen until January 17th 2016.
art history museum The Netherlands