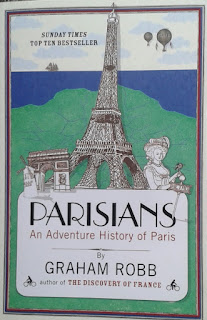 Did you know Marie Antoinette got lost on her way from the Tuileries to the coach that would take them out of Paris because there were no maps of Paris yet?

Did you know there is an entire city with streets and squares under Paris, that prevents the city from falling down? And do you know why the bones of the dead are kept here?

Do you know which criminal did not only play a huge role in founding the Sûretée, but was also their chief investigator for many years?

These stories and many more can be found in the book Parisians by Graham Robb.

How do you tell the history of a city without falling into a long list of facts or drowning in details?
Graham Robb found a very original way and uses the voices of the Parisians themselves. He used books, letters and other documents and lets the different people in different times to the talking. He does this in such a way that it feels like these people are actually talking to you and you are there with them.

Napoleon who visited the Palais Royal when he was just a young lieutenant.

The children who grow up in a city that is occupied by the Nazi’s.

Emile Zola’s wife who has to deal with the other family her husband has, and who ends up taking better care of them than her husband does.

Hitler, who was always fascinated by the grandeur of Paris and who organized a tour with himself as a guide on the first day the Nazi’s occupied Paris.

The bohemians, the communards, the people who used the metro for the first time in 1900, baron Hausmann, the students in 1968, general de Gaulle and Mitterand, the young people in the Banlieu’s all tell us their story.

It helps if you know a little of the history of Europe and France in general, since it is not always clear which person is speaking to us and what the chapter is about. Often Graham Robb begins with a certain detail and goes from there to his point, but never in a straight line and always with many details.

Fascinating, interesting, huge fun and very well written, Parisians is a book for everybody who loves Paris.