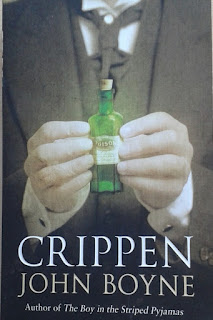 Cora Crippen had gone away, without saying goodbye to anybody. Her husband, dr. Crippen, told her friends that she went back to the States to look after an ill familymember, but died there suddenly. A tragedy for the widower.

Only shortly after her friends saw Crippen at the theater, with another woman who was wearing Cora’s jewels. They thought this was dubious, so they went to Scotland Yard.

An inspector went to Crippen to inquire what had happened, but believed the story Crippen told. At that moment, they did not suspect anything. Only when a panicked Crippen fled the country, the police knew something was wrong. They searched the house and found a dismembered body in the cellar. Crippen was a murderer.

However, the chances of catching him were pretty slim, since they had no idea where he or his mistress Ethel LeNeve were.
Then there was a telegram from the SS Montrose, a ship destined for Canada that said they had a suspicious couple on board, a Mr. Robinson and his son, only the boy seemed to be a woman in man’s clothes.

An inspector took a faster boat to Canada and managed to arrest Crippen the moment he set foot on Canada.

Back in London the process only lasted a couple of days. Crippen was found guilty and was hanged, LeNeve was acquitted and left for America where she died in the sixties.
The Crippen murder is one of the most famous English murder cases. It is also the first case where the suscpect was arrested with the help of modern communication.

John Boyne used this to write an excellent historical novel.

The marriage between Cora and Hawley was not very good. He was a frustrated man. He wanted to become a doctor, but his puritan mother refused him to go to college. He took a few written courses and was very miffed about the fact that he was not allowed to call himself ‘doctor’.

The couple came from America to London in the hope to revive their careers, but it was no use. In London Crippen also could not practice as a doctor and Cora wanted to become a famous singer, but she had not talent.

Meeting Ethel LeNeve was a wonder for him, finally a woman who thought he was marvelous and who wanted to take care of him, instead of his wife who made his life hell.

Despite messing with the facts a little bit, John Boyne wrote a very good book. In Crippen you alternate between times and scenes, showing us the people on the SS Montrose hoping to get away with it, and what happened in the past.
John Boyne even manages to make Hawley Harvey Crippen somewhat sympathetic, his wife Cora was a harpy who even took to physical violence to get what she wanted.

You begin to understand Crippen and when Boyne even comes with an alternative version of the well-known facts (not very believable, but fun to think about), you have a book that may take you a moment to get into, but in the end is difficult to put down.