Happy are the happy, Yasmina Reza 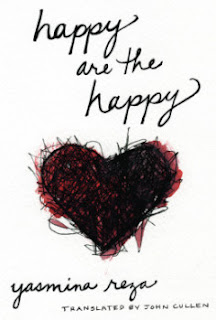 Everybody wants to be happy, but due to circumstances and our own actions many of us are often not very happy.

This is certainly the case with the characters in this book by Yasmina Reza.
There are several chapters, all from the viewpoint of a different character, but at a certain point you notice all these people are connected.

The first story is about a couple who get into a fight in the supermarket about getting cheese. This sets the tone for the book, since it is written in a very funny way, but with a bitter undercurrent. For the couple there is nothing funny about it.

After that first story you get the stories of family-members, a doctor, a befriended couple, a sister in law etcetera. All of them are stuck in their own lives and misery repeats itself, nobody is capable of escaping.

Each life also has their secrets, the things people do not want others to know, the things you want to keep hidden. The doctor who regularly hires a male prostitute to humiliate him, the woman who has an affair with a married man, the couple whose son is in an institution because he thinks he is Celine Dion.

Yasmina Reza wrote a seemingly simple book that is actually quite complicated. You have to be aware while you read that every sentence can give you a clue about who the person is and how they are connected to the others. Sometimes a connection will only become clear a few chapters later. Pay attention and re-read a lot, that is what you have to do.

This was my first book by Yasmina Reza, although she did publish screenplays, plays and novels in France.

I enjoyed getting to know this new writer, since I like a book where not everything is clear from page one, where the people are complicated and have layers and where there is more under the surface than you might think after the first time you read it. A book that will stick into your mind and that gives you new insights after a while.

It is not all gloom and misery in Happy are the happy. Yasmina Reza has a sharp eye for the absurd and is a good observer. She sees people and can imagine what lies behind their masks.

Little moments of happiness can also be found, but the motto of this novel, a poem by Jorge Luis Borges ‘Happy are the happy’, is something none of the characters can accomplish.