June 03, 2016
In the years before and after WWI the world was changing and things people hold for  secure were no longer true.

On one hand people had an optimistic view of the future, but on the other hand it was very clear that industrialization also brought misery to many people. The philosopher Nietzsche declared that God was dead and many were searching for a new way to give meaning to life.

The painters in Germany wanted to go into a different direction and focused on the inner-life of people. Nature and ‘primitive’ cultures were their inspiration. They used bright colours and wanted to paint not the outside, but to go deeper.
In 1905 a group in Dresden formed the artists-collective Brücke (the bridge)
and a few years later a group in Munich followed with Der Blaue Reiter. Artists like Kirchner, Max Pechstein, Kandinsky and Alexej von Jawlensky inspired eachother and of course artists in other countries.
Last Saturday a friend and I visited an exhibition about these artist in museum De Fundatie in Zwolle. The exhibition The wild, expressionism of  Brücke and Der Blaue Reiter is quite substantial and divers. I liked how they grouped the paintings into different themes, so you could see how different artists used that subject.
The bright colors and powerful way of painting made a lot of impact, and although I did not like each painting, I did find all of them interesting. And sometimes there were some great details (as I found with my obsession to spot cats everywhere) 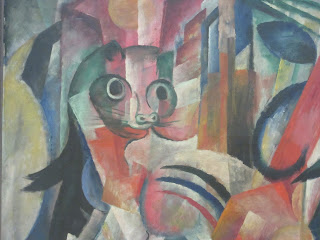 In short, an exhibition well worth a visit and where you can see many beautiful paintings.
The exhibition is open until September 18th 2016.


In Groningen is the other part of this exhibition, and that covers the neo-expressionists of the eighties. This was is open until October 23rd  2016.
art history museum