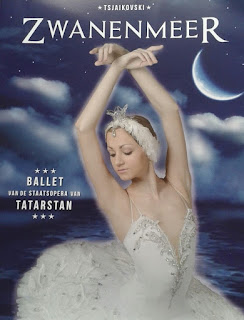 Last weekend I went to see a ballet for the first time in my life. I have always liked ballet, but for some reason I never saw one before.
I picked Swanlake as my first ballet, since I wanted to start with a classical one and it does not get more classical than this.

The ballet as we know it now, was first danced in St. Petersburg in 1895.

I saw the version by the Ballet of the State Opera of Tatarstan, a company that is known for performing classical ballets beautifully.

The story is well known, I think.
Prince Siegfried attends a ball and needs to pick a bride. Instead he goes into the woods and finds a lake with swans. He wants to shoot one, but before he can do that, the swan turns into Odette.

She tells him a sourcerer, von Rothbart, put a spell on her and the others. Siegfried swears his loyalty and love to Odette and goes back into the castle.

Von Rothbart and his daughter Odille are also guests and Odille tricks the prince into thinking she is Odette. He swears his loyalty to Odille, but then realizes his mistake.

Back at the lake, Siegfried and von Rothbart battle, Siegfried wins and the lovers live happily ever after.
There are other versions of the end where the lovers kill themselves or where Siegfried is left alone, but I liked the happy version very much.

We saw a magical performance, it was so very very beautiful. The music was amazing. I knew parts of it, but never heard it in one piece and I loved it.

The dancers had so much expression, even if I did not know the story, I would have understood it all the same. Their technical skills were very good (I sound like an expert now, don't I? But I liked what I saw very much) and we were in awe of what we saw on stage.

In short, it was enchanting and I know I will go to the ballet more often in future. 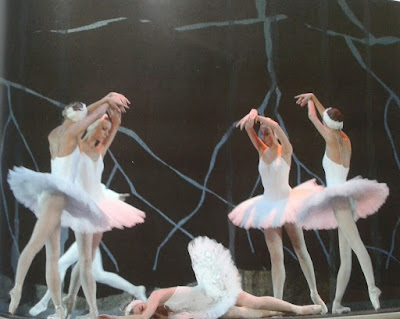 Of course I did not take photographs during the performance, these are taken from the Dutch booklet that I bought.
art personal