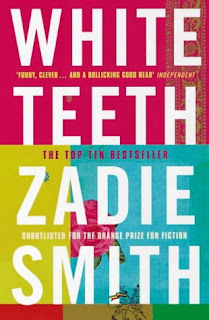 An immigrant has a lot of baggage, the roots of his culture, the expectations of the new culture and everything in between. The immigrant is torn between expectations and hope and frustrations and bitterness.

In White teeth we see the lives of three families against the background of Britain in the seventies, eighties and nineties. Racism, the riots in Brixton, the Fatwah against Salmon Rushdie and much more all influence the lives of the characters.

Archie Jones and Samad Iqbal have been friends since they met during WWII. Archie is now 49 and married to the Jamaican Clara Bowen. Togehter they have a daughter called Irie.
Samad and his wife Alsana have twins, two boys. Samad has high hopes for his sons, and decides to send one back to Bengalen so Magid can grow up a good Muslim and a man his father can proud of.

The other son Millat will have to create a life in Britain, but he is certainly not a man his father can be proud of.

When they are in Secondary School, Irie and Millat get to know the Middleclass family Chalfen. They were once also (Jewish) immigrants, but are now so English they have forgotten this themselves.

Zadie Smith writes in a very hilarious style, that makes even the most painful situations funny. But do not worry, it is not an intentional funny book in the sense that the funnyness is forced. I loved how in the end all the crazy things and even crazier people came together in an ending with a few amazing twists.

White teeth is the debut novel of Zadie Smith. She called her own book good but not great. In my mind, good is pretty great in this case.