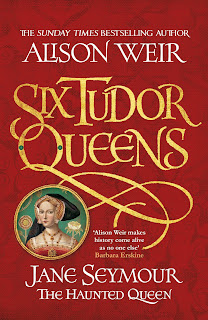 When king Henry VIII of England divorced his first wife and beheaded his second, he needed a new wife. He still needed a son to succeed him.

His third wife was Jane Seymour, and she gave him the son he so despirately wanted, the later king Edward VI. Unfortunately, Henry and Jane did not create a huge dynasty, since she died a couple of days after the birth.

We do not know much about Jane Seymour, ans somehow she always seems a bit forgotten when we talk about the wives of Henry VIII, there are others with so much more drama.

We do know Jane was not a religious reformer like her brothers were. For example she asked Henry to leave the monasteries alone. She had an ambitious family and had a lot of respect and love for Queen Katherine. Also she tried very hard to reconcile princess Mary with her father.

Alison Weir used these facts to built a story about a young woman who becomes queen because she loves the man who is king. In her story, the third of the books about the Tudor Queens, Jane is no longer a mousy girl in the background of history, but Alison Weir brings her to life.

Jane grew up in Wiltshire, and became maid of honour to queen Katherine. Even after Henry divorced Katherine, she stayed in her service, until her family told her to come to court and serve the new queen. After all, there was no gain in serving a queen who was pushed aside.
Reluctantly Jane served queen Anne.

Jane's kindness and quietness were like a balm for king Henry after all the drama Anne put him through, but initially Jane refused the king. Especially when queen Katherine was still alive. Only when she died and the proof of Anne Boleyn's infidelities became clear, Jane felt free to say yes to Henry.

After she became queen, she tried to model herself on queen Katherine, but it was hard for a modest woman who never thought she would become queen.

Alison Weir is a great historian who knows her subject very well. And again she has managed to write a very interesting story about the wives of king Henry. As usual she tells what facts she used and how she took some liberties with some things that are not clear. Very interesting is that she asked people from the medical profession what Jane's cause of death could be and it sounds very plausible.

I love this new book in the series about the Tudor queens, and I am already looking forward to the fourth book!