After the party, Cressida Connolly 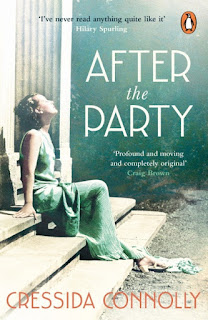 Phyllis, her husband Hugh and their three children arrive in England after a few years in South America. Phyllis is happy to be with her sisters again. For the moment and until they have their own home, they will stay at Patricia's house.

And Nina has the perfect solution for keeping the children busy during the long Summer, she is involved with the organisation of Summer camps along the South coast of England and Phyllis can help out, and the children as well.

These Summer camps are filled with sports and games, good food and political gatherings. Because these are not just any Summer-camp, it is 1938 and these camps are organized by the BUF, the British Union of Fascists. Sometimes the leader, Sir Oswald Mosley also comes to pay a visit.

Phyllis and her husband join the movement, just as her sisters and their husbands did. They are all convinced they are real patriots and Sir Oswald is the best thing that could ever happen to England.

But when the war breaks out, the government does not want a lot of nazi-sympathizers roaming about, and Phyllis and Hugh are put into prison, just like a lot of other members of the BUF. The question is if Phyllis will ever be able to go back to her old life.

After the party is a very good book. It is well written and gives an excellent impression of the the time-period. Often a book gives characters very modern way of looking at things, but in this book the way Phyllis and Hugh have views completely in character with the times and their class.

I love how the book switched from the events in the years 1938-1943, and 1979 when and old Phyllis tells about her life to an interviewer. She has become bitter and angry and is not a very nice woman. And that is well done, since you do like her when the book begins, but you also understand how Phyllis turned out like this. (not that you agree with her).

Phyllis is not alone in still being a great supporter of the BUF and Mosley, even long after the war. Of course, they have to admit that the concentration camps were bad, but Mosley would never had something like that happen in Engeland. And they are still bitter about the fact they were imprisoned and that there was no support for them.

Cressida Connolly has written an excellent and good novel, that is engaging and interesting and historically well done.