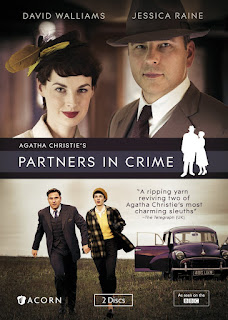 Tommy and Tuppence Beresford are not my favorite couple written by Agatha Christie. She wrote four novels about them and a book with short stories, called Partners in crime.

The first book, The secret adversary, is written in 1922 and we meet Tommy and Tuppence when they are a young couple, fresh from WWI. They have no money and decide to seek a job as adventurers. This brings them into contact with the secret service. The second novel, N or M, is set during WWII.

The others novels, By the pricking of my thumbs (quite good, actually) and Postern of fate (not so good) are set during the sixties and seventies. Tommy and Tuppence are aging, unlike Poirot or Miss Marple!

In 2015 a series was made, with three episodes for The secret adversary and three episodes for N or M. The whole series is set in the fifties, with Tommy and Tuppence married and with a son and a dog. They are in financial troubles, since Tommy has some unlucky businessadventures.But on a train they meet a woman called Jane Finn and when she is murdered, Tommy and Tuppence follow the leads to solve the murder.

Partners in crime is not very faithful to the books and the original stories, but it is well done. I do like the fifties atmosphere, and on the whole I really enjoyed it. The series is charming and fun, although a bit silly at some times. (I think part of this is due to the fact that the original book was set in the twenties, and Agatha Christie wrote Tuppence like a bright young thing. This is fine for the twenties, but a bit weird for a woman who is old enough to have a ten year old son.)

I loved Jessica Raine as Tuppence, I think she looked and acted the part, and her clothes were lovely! (I especially loved her hats, I want those hats).

Worse was David Williams as Tommy. I did not completely hate him, but there is zero chemistry between the two and often he is too stupid and dumb for my liking. In the books, Tommy is not stupid, but in this series it is hard te believe he is capable of doing anything right.

But for the rest it was a fine series and I utterly enjoyed it. Do not look too closely at the plots, but just lean back, drink a nice cup of tea and enjoy this lighthearted and charming series.