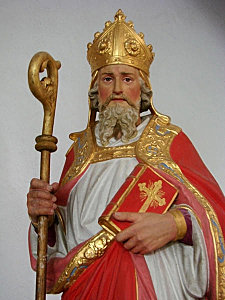 Today it is the fifth of December, a date every child here in the Netherlands knows by heart. It is the feast of Saint Nicolas, or as we call it here: Sinterklaas.

In the fourth century saint Nicolas was bisshop of Myra, now in Turkey. During his life he made a lot of miracles happen. He saved a child from burning, he saved sailors from drowning, he prevented a famine and when a poor man had no dowry to give to his daughters, little pouches with money appeared in the house, enough for the dowry.
In the 11th century his body was taken from Myra by sailors who brought him to their hometown Bari, where they built a cathedral for him.
Saint Nicolas is the patron saint for sailors, children and he is also the patron of Orthodox Russia and the Dutch capital of Amsterdam.

In the Netherlands the catholic roots of the feast of Saint Nicolas are mostly forgotten by most people. The tradition of celebrating 'Sinterklaas' is centuries old and the tradition has many customs. According to the stories Saint Nicolas lives in Spain during the rest of the year, but in November he comes to the Netherlands on his steamship. He has the company of his servants, called the 'Zwarte Pieten', (the Black Petes).
﻿
When Sinterklaas arrives in the Netherlands, he is greeted by the mayor of the town he arrives in and usually there is a huge feast where all the little children are dressed as little black Petes.
﻿

It is customary to give presents to eachother, especially to the children. In the weeks before the fifth of December, children can place their shoe by the fireplace, and Saint Nicolas will fill it with little presents and sweets. This was already done in the 17th century, as you can see on this picture by Dutch painter Jan Steen. 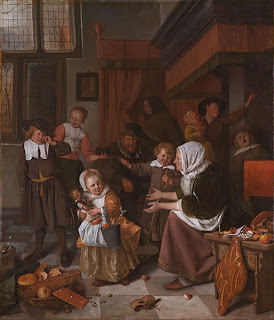 Sinterklaas rides on a white horse over the rooftops, and he uses the chimney to deliver the presents. In his big red book he has the names of all the children and he knows if they were good or not. Sometimes, the children were told that bad children would be taken back to Spain by Sinterklaas.
Almost every family (especially if there are little children who still believe in the 'Sint') will celebrate 'pakjes avond' (presents evening) tonight and also in all kinds of places you will find Saint Nicolas, for example in schools. When the children are older and do not believe in Sinterklaas anymore, it is usually still a family celebration, with loads of presents, and sometimes poems and all kinds of traditional sweets like pepernoten, suikergoed, marspein and of course: chocolate letters. (your first inital in chocolate) 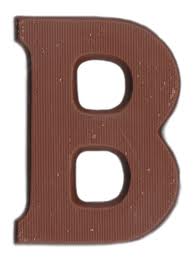