April 22, 2013
The enchanted april is a book by Elizabeth von Arnim and it was made into a film in 1992.
It is the story of two women who meet eachother in 1920's London. Rose Arbuthnot and Lottie Wilkins want to leave their dull and boring lives in despressing London behind, and respond to an advertisment for a villa in Italy, for the month of April. They decide to take two more women with them, to split the costs. Lady Caroline Dester who is a known socialite who just wants to be left alone for a while wants to come, and mrs. Fisher, a formidable old lady, both want to join them in Italy.
During their time in the beautiful Italian surroundings, all the women are transformed, they are more relaxed and happier.
Both Lottie's and Rose's husbands come to join them, and because of the atmosphere in the villa, all of their marriages are transformed as well, as the husbands see their wifes in a different light.
The film Enchanted April is absolutely lovely and I watch it regularly. Especially in April of course, but really always when I feel I need a dose of Italy, and lovely romance and the 1920's.
Miranda Richardson, Josie Lawrence, Joan Plowright and Polly Walker are the four ladies, and aso  Michael Kitchen, Jim Broadbent and Alfred Molina star in this beautiful movie.
﻿ 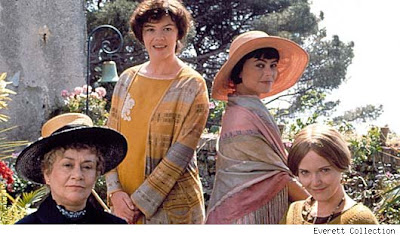