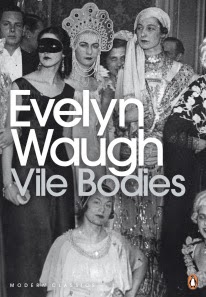 After I read Brideshead revisited and Sword of Honour I can think I can safely say that I am a fan of Evelyn Waugh. I wanted to read more by him and this book was the first.


It is the story of the rich upperclass youth in the twenties and thirties, known as the Bright Young Things. They were too young to have fought in the trenches of WWI and they pass the time by going to parties, gossip, going out, drink cocktails and champagne and going to parties. It is an empty life full of boredom that would come to an end in the horrible WWII.
The book was written in 1930, ten years before WWII broke out, but Evelyn Waugh predicted in this book that a European war would come.


Vile bodies is the story of Adam and Nina who are a part of the BYT. Adam wants to marry Nina, but he needs money first. During the entire book we follow Adam on this quest to earn money, and we also see him loose it all the time.
We meet Adam on a ship sailing for England. He has in his bag a manuscript of a book he wrote, only customs declare the book is too dirty to be brought into the country and they confiscate it. Adam then wins a thousand pounds in a bet, but he gives the money to a drunken major who will place a bet for Adam in the horse races with the money. Unfortunately they cannot contact each other again, since they do not know each other’s names.
Adam visits Nina’s father, who thinks he has come to sell him a vacuum cleaner and who gives him a check for a thousand pounds, written out to Charlie Chaplin. Adam tries to earn money as the writer of a gossip column in the newspaper, but this also fails. Finally Nina marries Ginger, a childhood friend, although it soon turns out this is a wrong choice.


You can always recognize Evelyn Waugh by his beautiful use of the English language. He is also a master at writing funny scenes, without getting vulgair. The first part of Vile bodies is very funny. The dialogues are sharp and witty and some of the scenes are completely surreal, like the conversations Adam has with his landlady or when he visits Nina’s father. All kinds of absurd people make their appearance, like the guests in the hotel Adam stays in, or the prime minister who does not understand his cabinet meetings.


Later in the story the tone changes, it is no longer light and airily, it becomes more depressed and bitter. This was due to the fact that Evelyn Waugh’s first marriage failed in this period and he was not in a happy mood himself.
The BYT do not have a bright future, one of them commits suicide, another ends up in a mental institution and the others also fail to make something of their lives.


The title Vile bodies appears to be a reference to a passage from the Bible, a letter from Paul to the Phillipians. (I’ve tried to look it up, but I could not find it, but I have of course a Dutch translation of the Bible)
In this case the term refers to the hedonistic lifestyle of the BYT, who care for nothing, have almost no morals and who go from party to party without ever stopping to think. Father Rothchild, a Jesuit and the one who says in the book the young people are desperate and need some real values, is perhaps the voice of Waugh himself.


In 2003 Stephen Fry made Vile bodies into a movie, called Bright Young Things. It is difficult to film a book like this, with the short scenes and the fast pace, and sometimes it goes off the rails a bit, but all in all I liked this adaptation of a very special book. 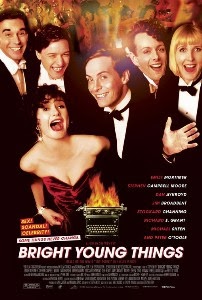