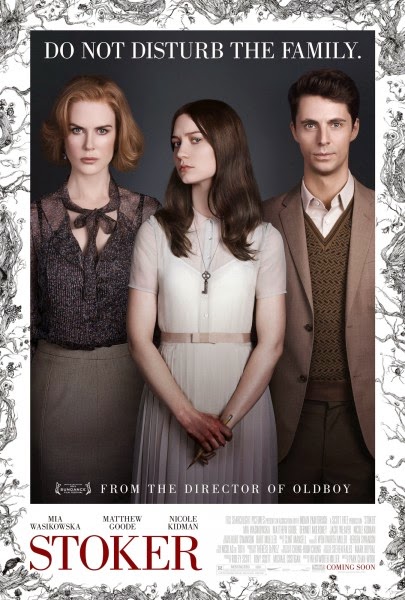 On her eighteenth birthday India Stoker’s father dies in a car accident. She was very close to her father and now she only has her mother Evelyn. She and her mother are not very close at all.
At the funeral her father’s brother, Charlie, is also there. He travelled in Europe and India and Evelyn never met him before.
Charlie offers to stay for a while to help them and Evelyn is very eager to agree. She likes the attention Charlie gives her. India tries to keep her distance, she does not need this new man in her life. But slowly and surely it seems there is something sinister about uncle Charlie. And instead of running away, India is intrigued.


Stoker is a visually stunning movie. The way it is filmed, the way scenes and images flow is absolutely amazing and beautiful. An example of this is the scene where India brushes her mother’s hair, and the hair turns to grass. But there are plenty of these examples.
What is wrong with Charlie and as it turns out, also with India, becomes clear with all kinds of clues, from the hunting India did with her father to the little spider in the first scenes. It is perhaps not very subtle, but that did not bother me.


Nicole Kidman plays Evelyn and as always she did a very good job. I would have liked to see her in a bigger role in this film.
I saw Mia Wasikowska before in the 2011 version of Jane Eyre, and here she has the same quality of strangeness without making it into a caricature. I never saw
Matthew Goode before. It seems he played in the movie version of Brideshead revisited, but I never saw that one. This was the first film I saw him in, and I was not disappointed.


It is difficult to place Stoker in a certain genre, it is perhaps a psycho/drama/thriller? Whatever it is, I thought it was a very interesting movie and I enjoyed watching it.
film/television