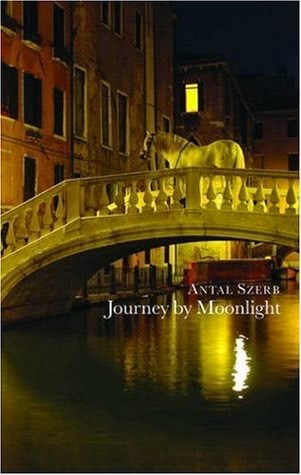 Mihály and Erzsi just got married and they are on honeymoon in Italy. Mihály is expecting quite much of this trip, when he was young he read a lot about Italy. When he is honest, he knows he is not sure if marrying Erzsi was the right thing, despite the fact she left her first husband for him. He feels like she does not really understand him and never really will.


After they meet one of Mihály’s friends from his youth, Mihály is mostly busy with his own memories about the friendship he had with the eccentric siblings Tamás and Éva. They took him out of his bourgeois surroundings and showed him a completely new kind of life. Later, Tamás would commit suicide and this has followed Mihály ever since.


When the honeymoon continues, Mihály steps out of the train that will take them to Rome to buy a cup of coffee at the station. He almost misses the train when it leaves the station again, but he manages to jump into one of the last wagons. Only the train was divided at the station and the first part of the train, with Erzsi in it, will go to Rome, while Mihály has no choice but to travel to Perugia. He comes to terms with the fact that he is now separated from Erzsi after all, their marriage would never work anyway and he decides to hide completely. When he gets a nervous breakdown, he is forced to look for the ghosts from the past, Éva and especially Tamás.


Journey by moonlight is written by Hungarian author Antal Szerb. He wrote several novels and a non-fiction work about literature. He was from a Jewish family, who became Catholic, although that did not help them when WWII broke out. In 1945 Antal Szerb would die in a workcamp.


Journey by moonlight is a beautiful book. It is written very well, with sentences that are so beautiful or witty you have to read them a couple of times.


The marriage between Mihály and Erzsi was doomed from the beginning. This is clear in the first pages when Mihály walks all night through the streets of Venice, instead of staying in the hotel with his new wife. He married her because it seemed like the best solution, but in the end their marriage is just a little stray from their real life-path.
Neurotic Mihály and the people he meets will all have to find their path in life, despite the attraction of death.


Mihály and Erzsi are in Italy and notice that Il Duce and fascism are present everywhere, but they do not know yet where it will lead to. Of course, Antal Szerb did not know this himself at the time. Knowing that this book was published in 1937 and knowing what happened to the Jews in Europe and to Antal Szerb makes reading this book even more special.