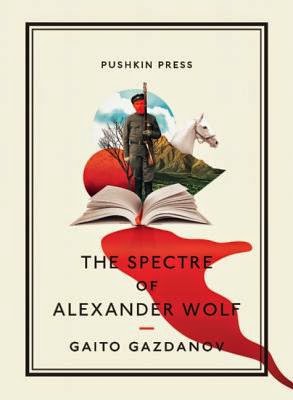 During the Russian civil war a young man fought on the side of the Whites. When he is on the steppe he meets a man on a horse who fires a shot at him and the young man kills the other man. After the war he ends up in Paris where he does odd jobs to earn his living.
He never forgot the incident on the steppe and when he reads about the incident in a book by the English writer Alexander Wolf, he is shocked.


He tries to find out more about this Alexander Wolf, but he is not that easy to track down. The English publisher says Wolf is an Englishman who never left England and the letters he sends are not answered. In Paris he meets a fellow Russian who happens to know Alexander Wolf and when the young man finally meets him, fate catches up with him.


Gaito Gazdanov is a Russian author who fought against the Bolsheviks during the Russian civil war. He ended up in Paris where he did odd jobs and tried to write. This book was published in 1947 and a first English translation was published in 1950. After that this writer and his books were forgotten. Only a few years back a German publisher discovered him again and after that more publishers all over Europe made translations and published Gazdanov’s work. Here in The Netherlands there were even two publishers who both loved this book so much they decided to publish it together.


The spectre of Alexander Wolf is not a long story, it has under 200 pages (my Dutch translation has 172). The story is interesting, a man shoots another man and later he reads about it in a book, while he was the only one who knew what happened. The story is told in a very precise way, there is not a word too much in it. Sometimes you wonder why a certain events is described in detail, but later you realize why this was necessary.
Some things that happen are not unexpected, but the ending is. I read that Gazdanov wrote three endings, but finally decided this is the only right one. And I agree, it could not have ended in another way. I cannot say more, because then I would give away too much of the story. The only thing I can say is everyone should read this beautiful small, but also grand story for themselves, and be surprised.


I love how sometimes a writer is rediscovered and his books are republished. Another book by Gazdanov was published a few years ago, An evening with Claire and of course I bought that one immediately. A review of it will follow next week.