The song of Achilles, Madeline Miller 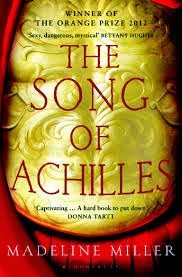 Patroclus is a prince, but his father is not very happy with him. Patroclus is not fast enough, smart of enough or princely enough to satisfy his father. By accident Patroclus kills another boy and his punishment is to be banished. He is taken in by the king of Phthia, the father of Achilles. Achilles is a golden boy, he is strong, handsome, kind and an amazing fighter. Despite their differences the boys form a friendship that grows into love.


Paris of Troy kidnaps Queen Helena of Sparta and that is the beginning of the Trojan war. The Greek kings from an alliance to revenge what happened.


According to the prophecy Achilles will earn fame and claim the title as best of the Greeks. Patroclus is worried for his beloved friend and he comes to Troy with Achilles.


The war does not go very well, sometimes the Greeks are on the winning side, sometimes the Trojans. It will take ten years before there is finally a winner. During these ten years Patroclus and Achilles have to make choices, and often the outcome of these choices cannot be foreseen.


The story of the Trojan war came to us in the form of the Iliad, that is contributed to the Greek writer Homer. He probably did not write the whole thing himself, it is very likely the story was already told in an oral tradition and these days scholars even think more than one writer contributed to the story.


The new story Madeline Miller tells fits within this tradition. She tells the story from the viewpoint of Patroclus and this gives the story, but most of all Achilles, a new dimension. Achilles is now a lot more human and a lot more sympathetic then when he was just ‘the war hero’.


Patroclus tries to do the right things, and has to find his way between the prophesies of the gods and the manipulations of the kings.


The growing bond between Achilles and Patroclus is written beautifully and that makes The song of Achilles not just a story about a hero fighting a war, but a story about the power of love.


I do not know why it took me two years to finally pick up this book and read it, but I am glad I finally did. I really enjoyed it and I even cried at the end. Beautiful.