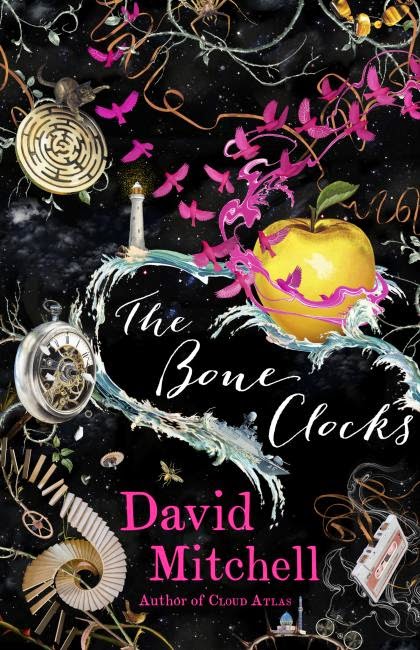 This was a very hard book to write about. I really struggled with it and to be honest I am not quite sure I managed it, but this is the best I could do J.


The only other book I read by David Mitchell is The thousand autumns of Jacob de Zoet, and I am not familiar with his other books.


The bone clocks in divided into six parts, each with a different main character and each interloping. The first part is set in 1984, the last in 2043.
The main character is Holly Sykes, who narrates part one and six and who is also present in the other parts.


In 1984 Holly Sykes is fifteen years old and she had a row with her mother over her very unsuitable boyfriend and Holly decides to run away from home. During her journey she meets a woman called Esther Little, who seems to know Holly. Holly also experiences a few things that she knows are not possible and really could not have happened. We learn that as a young child Holly could speak to people who were not present, this only stopped when she was seven and visited a psychiatrist.


In part two we meet the amoral Hugo Lamb who has a short affair with Holly when they are both in Switzerland.
In part three we hear from Holly’s partner and the father of her child. He is a renowned war journalist who cannot detach himself from his experiences in Iraq.


In part four we meet writer Crispin Hershey who meets Holly at a literary festival. At first he wants nothing to do with this crazy woman, but later they become friends. Finally, Crispin has to pay the price for something he did out of spite an revenge.


In all these parts is it clear something is going on in the World, something supernatural. It also becomes clear a choice has to be made between right and wrong, good and evil. There is an ongoing battle between these two and sometimes ordinary people, like Holly, get caught up in it.


In part five Holly finds out what is going on, and so do we readers. It seems there are two groups of people in the world who are immortal (or Atemporals) of some sorts. There are the Horlogists who are reborn every time they die, and the Anchorites who have to sacrifice souls to gain eternal youth. Between these groups there is a battle of life and death, with good and evil and even the whole of mankind at stake.


The bone clocks is utterly unbelievable, but somehow, this does not matter. Mitchell writes so engaging you just go along with everything. Holly is a sassy woman with a sarcastic  tongue and I really liked reading about her. The other characters are also portrayed very well, each with their own voice. I also liked how Mitchell managed to reference different books (including his own), writers and artworks. This made it fun to puzzle and see if I could find all the clues (I do not think I even got half of them)

Funnily enough, part five with the explanation and the battle between horologists and anchorites was my least favorite. Somehow the outcome of the battle was not very engaging and even boring. I was left with the feeling: Is this all? In short, the epic battle fell flat.


But the sixth part was brilliant again, I think. Here we find Holly in 2043, taking care of her grandchildren in Ireland. There has been a worldwide crisis and civilization as we know it, has collapsed. This part even frightened me and made me wonder; ‘what if’.


In short, The bone clocks is a special book by a very good story teller, but not every part is equally strong.