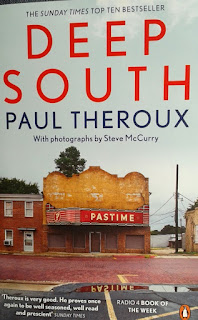 Paul Theroux, the famous writer of travel books and of novels, decided not to go abroad in 2012, but to travel around in his own country, in the part known as The Deep South.
It was not just one trip, he kept coming back, fascinated by what he saw and the people he met.

The US spends hundreds of millions dollars in Africa and Asia, while in their own country in some parts in the south have to work with just a couple of hundred thousand.

Nowhere in the country is there such poverty that thirty or sometimes even fifty percent of the people live below the poverty-level. This is largely because the big companies that provided the jobs went abroad and there is nothing to replace those jobs. Literacy is also low and for many people their living conditions are dire.

At the same time there is also a friendliness and a willingness to help that Paul Theroux never encountered before in the US and that is the reason that he keeps coming back.

He drives his car from town to town, stopping where he wants and staying a few days where he likes it. And everywhere he comes, he talks to people and writes down their stories. He does not go to big cities like New Orleans or Charleston, but to thos areas the tourists never see.

Paul Theroux goes to churchservices, barbecues and gunshows. He eats soulfood, talks to the Indian immigrants who often own the motels, the poor white farmers, the poor black farmers, the pastors, the politicians and the people who run the charities.

He is not afraid to ask questions about segregation back then and now and because of all this he gives a vivid and fascinating account of the south, that is both very interesting, but also great fun to read.

Deep South is a must-read for everybody who wants to know more about the deep south of the US, a place full of contradictions but where there is more than just stately plantations and the Klan. It is a place where family is important, the (lost) Civil War is still an open wound for some and segregation may not have been so black and white as you might think.

It is a place full of extraordinary people who try to make the best of a difficult situation, while their own government seems to have forgotten them. Deep South is a tribute to all those people who make the South the South.

I did have one little problem with the book though, I immediately wanted to take a plane to the US, rent a car and drive to the South to try some deep-fried chocolate pie myself! J