A farewell to arms, Ernest Hemingway 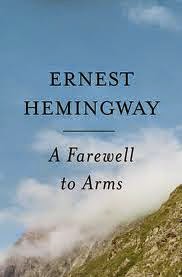 Ernest Hemingway has been a source of fascination for me for years. The man that is, since I must admit I have not read a lot of his books.


A few weeks ago, I tried again and this time I succeeded! I read A farewell to arms and not only did I finish it, I also liked it very much.


If you are looking for a poetic style with many adjectives, Hemingway is not the writer you are looking for. He is frugal and sparse with his words and brings the language down to the bone with minimal variations. He had the iceberg theory during writing; the writer should not tell everything, but the reader should sense there is more to the story than he reads.


A farewell to arms was his first novel and he used his own experiences as an ambulance driver when he was a volunteer in the Italian army during WWI.


It is the story of Frederick Henry, who drives an ambulance as a volunteer in the Italian army and falls in love with the English nurse Catherine, just like Hemingway himself fell in love with a nurse. In both cases, real and in the novel, the affair ends tragically.

Hemingway’s sober language lends itself very well to describe the war and the conversations between the soldiers. The way he repeats words and expressions gives another layer to the crazy chaos that makes a war.


This way of writing does not work so well to convey a love story. Where the conversations between the soldiers were funny, absurd and had meaning, I thought the dialogues between the two lovers were wooden and even boring. I never felt Catherine and Frederick were very much in love or even liked eachother.


In short, A farewell to arms is a very good story about WWI and it has beautiful scenes and funny moments. A great lovestory it is not, I thought, but a book cannot always have everything. I was glad I finally read and liked a book by Hemingway and I know I will read another one of his novels soon. I am finally over my Hemingway-blockade.