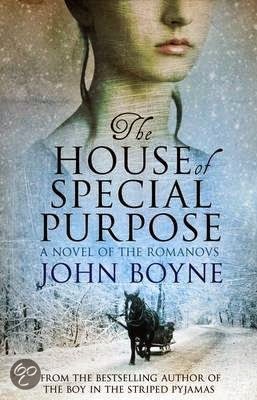 In 1981 an old lady, Zoya, is in hospital. She is dying. Her husband Georgy looks back on his life and the life he shared with his Zoya.


Georgy grew up in a little village in Russia. One day it was visited by Nicolas Nicolaevich, cousin to the Tsar and commander of the army. Due to some coincidences Georgy saves his life and the boy is brought back to Saint Petersburg to join the special guards who are responsible for keeping the Imperial family safe. Georgy’s special task is to look after the tsarevich Alexei.


It takes some time for Georgy is used to his new life, but he has all the opportunities to witness important moments in Russian history. He met Rasputin, saw the changes in the way people thought about the Imperial Family, he was present when the Tsar abdicated and is there in Yekaterinburg.


After the revolution Georgy flew to Paris where he married Zoya. In the years that followed they lived in Paris first and then came to London, where Georgy managed to get a job at the British Library.


The house of special purpose is very romantic and sometimes a little bit too coincidental. It is not very plausible. Certainly not if you consider that is has many historical errors. There are details that are incorrect, for example we know Alexei was wounded in Yekaterinburg, his father had to carry him down to the cellar on that fatal night. And most importantly the main storyline is completely false.


But somehow, I do not mind. I usually do not like it when a book takes too many liberties with historical facts, but in this case I forgive John Boyne.

He is a very good writer and he knows how to tell a story. He know how to paint a scene, characterize a person or describe an event in just a few lines.


The story is told by jumping through history and this makes that the story is never boring. And slowly you understand what happened in 1918. The differences between the pomp and circumstance of the Imperial court, the poverty in Paris and the middleclass life Georgy and Zoya lead in London is well done.
The house of special purpose is a very beautiful story.
This is in fact the story that began my interest in Russian history and love for the Russian Imperial family. I was very glad I loved the book as much as I did the first time. Even though I already knew the twist in the ending, I absolutely loved it again.