The deliverance of evil, Roberto Costantini 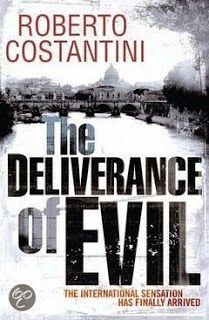 It is 1982 and Italy plays in the final against Germany. Commissario Michele Balistreri gets the message a young woman, Elisa Sordi has gone missing. He wants to watch the final and he refuses to take this message seriously. Only when the final has been won, the consequence of this decision becomes clear; Elisa is found, tortured and murdered.

Balistreri has a clear idea in what direction the investigation will lead him and he focuses all his attention on one suspect, with a horrible result.

Twenty four years later Italy plays in the finals again, and another crime has been committed. Young student Samantha is raped and murdered. Commissario Balistreri is the head of a special unit now and he must solve this case.

Soon it becomes clear who did it, three Romanians are arrested and they confess. During these days two things consume the Italians: the successes on the football field (soccer for the American readers) and the hatred for the immigrants, especially the Gypsies and the Romanians. Balistreri does not want a repeat from the events twenty four years ago and he does not want to accept the Romanians did it just because that is the most convenient.

He wants to get to the bottom of this case. Is there a connection between the murdered student and a Romanian prostitute who has disappeared? And what connection can be found between these crimes and the murder of Elisa Sordi? And what games do the politicians, the secret service and perhaps even some people in the Vatican play?

Michele Balistreri is not a typical main character when we get to know him in 1982. He grew up as the son of a rich Italian colonial family in Libya. He had a rough and violent childhood. He first joined the neo fascists and later helped the secret service to arrest these same neo fascists. He went to the university to study philosophy and then entered the policeforce.

In 1982 he had been a police officer for two years, and he is stationed in one of the quietest neighbourhoods of Rome. Michele Balistreri is bored and considers the police work to be beneath him. The only things he enjoys is using his job to pick up women. This is his main hobby besides playing poker and drinking whisky.

In 1982 Michele Balistreri might be charming, he is not a kind or even a good man. He may be a police officer, he is definitely not one of the ‘good guys’. He is egotistical, hard and he refuses to admit he is wrong, something that does not help the investigation.
Twenty four years later we meet a changed man. A man who still suffers from the mistakes he made and who refuses to make the same mistakes in this investigation.

The deliverance of evil is a very clever and intelligent thriller that brings together different storylines without effort.
Roberto Costantini wrote an impressive debut, and I really hope there will be more books.

This article was published before on my bookblog A corner of the library, but I decided to bring the Italian books over here.
books Italy

A couple of times a week I try to make a long walk. I enjoy the sunshine, the quiet and the things I see. Although I am walking through the neighbourhood, there is still a lot of nature and many beautiful things to see.
I love how taking my camera with me, makes me look differently at my surroundings and notice things I do not notice when I am just walking.

Today it is 33 years ago that Steve McQueen died. His fans still love him, and honour his memory.

I am very interested in Virginia Woolf and recently I read the book 'Vanessa and Virginia' by Susan Sellers. That book…