In the light of what we know, Zia Haider Rahman 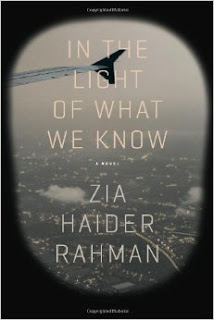 Two men became friends during their studies at Oxford. They both ended up working for a bank, although one of them became a lawyer later.

Both are from completely different backgrounds. The main character, whose name we do not know is from a high-class family from Pakistan. His grandfather was a diplomat, his father is a scientist.

Zafar, his friend, comes from Bangladesh. His birth is surrounded by the shame of what happened there during the war of independence of 1971. He wants to belong, but he does not know where, he wants knowledge and has little respect for social codes.

The story begins in 2008 when the man who tells us the story gets an unexpected visit from his friend Zafar. He himself has a good job at a bank and enjoyed the financial wealth that came with that. He was responsible for messing with the mortgages to make more money for the banks.
Now he has an empty house, a marriage that is not working and a job he will probably lose because his bank will pin their problems on him.

Although they have not seen eachother for years, there is still their connection and not before long they have long conversations in the kitchen when Zafar tells what he did in the previous years.

In the light of what we know is a very clever story. Somewhere on the first pages we hear about the theory by Kurt Gödel that in every system there are things that are true, although they cannot be proven. That is something to remember when you read this book.

Jumping though the time we come to know what happened to Zafar, the story leads us from his childhood and years in Bangladesh to his relationship with Emily Hampton-Wyvern, a mental institution and finally Kabul in Afghanistan. This story is set against the story of the other man, who never really questioned things, but does have some huge problems now.

The class-system, education, the splits immigrants are in, knowledge and ignorance, the support religion can offer, the manners of the English upper-class, western ngo’s in a bombed country, post-colonial feelings, the casualties of war, in short, the whole world post the eleventh of September 2001 is captured in this book.

There are many great things to be found in this book; the way the story is built, the references to writers and scientists and books, and even some mathematic theories (not so you can’t understand). In some books this is done to show the reader how very intellectual the writer is, but luckily not in this book. The many references fit quite naturally into the story and it helps that the main character also does not know certain things. He tells us Zafar told him this, and that he looked it up later.
Some metaphors are a bit too obvious, but on the whole most of them give a beautiful and deeper dimension.

Only halfway through the story I felt it fell a bit flat, and at that point the pedantic conversation between Zafar and his friend, that had not only the axolotl, the ponte vecchio but a hundred other things in it, irritated me immensely.

I was glad the story picked up after that, especially since I wanted to know what the matter was between Zafar and Emily and what happened in Afghanistan. There were some surprises here, and it made me like Zafar even more.

Zia Haider Rahman studied in Oxford and worked as a banker before he became a lawyer who specializes in international human rights. In the light of what we know is his first novel and it has been a huge success worldwide.
Well-deserved, I think!

A couple of times a week I try to make a long walk. I enjoy the sunshine, the quiet and the things I see. Although I am walking through the neighbourhood, there is still a lot of nature and many beautiful things to see.
I love how taking my camera with me, makes me look differently at my surroundings and notice things I do not notice when I am just walking.

Today it is 33 years ago that Steve McQueen died. His fans still love him, and honour his memory.

I am very interested in Virginia Woolf and recently I read the book 'Vanessa and Virginia' by Susan Sellers. That book…