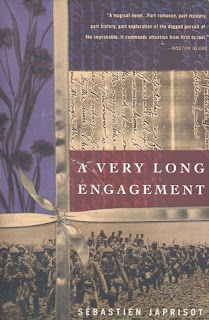 Januari 1917. The war has been going on for years and most soldiers have little hope of seeing the end, they gave up hope. Some of them tried to desert, others tried to wound themselves so they would go home. Military command thinks these people should be punished severely, since their example could mean others would do the same. Five soldiers are sentenced to death for self-mutilation.

Five men are brought to one of the front trenches. They will not be shot by a firing squad, but they will be send out into No-man’s land so the Germans will finish them. This is not told to their families, because this goes against all the rules and regulations. The families will get the message their loved ones were killed in battle.

Mathilde, the fiancée of the youngest soldier who was called Manech, gets a letter from a dying sergeant when the war is over. He was there on that awful day in 1917 and he was the one who wrote Manech’s last letter to Mathilde. He tells Mathilde what happened and when she hears his story, she knows she wants to find out if there is a slight chance that Manech survived.

A very long engagement is a beautiful story for several reasons. Firstly there is Mathilde, who is a great heroïne. She is stubborn and willful and determined to go her own way, despite her handicap (she is in a wheelchair) and the advice of others who tell her to leave the past alone. 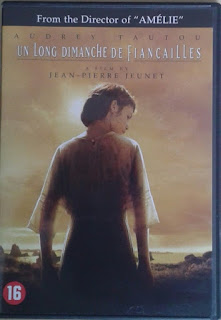 Sébastien Japrisot has a great style, I liked his funny remarks and beautiful metaphors. The story is well written. You get to know the five men in the first chapter, but during the rest of the book you get to know their backgrounds and their families and you realize the influence the war had on all of these people. That also makes it an impressive book. The war plays a big part, but it is not a war-novel, the most important themes are love, holding on to hope, coping with loss and getting to the truth.

Un long dimanche de fiançailles was filmed in 2004 with Audrey Tautou as Mathilde. Although many things changed, because a film can never follow a book completely, the layers of the story remains intact. I liked Jodie Foster in a small role, with a perfect French accent.

The film was beautiful, funny and moving, just as the book is. I was glad I read the book first before I saw the film, because then backgrounds etc are more clear so I could understand the story better.
But I really recommend both film and book.