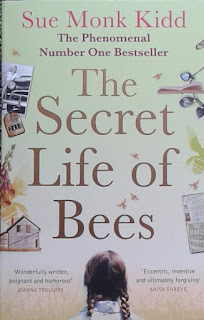 This book came out a couple of years ago and in 2008 a successful movie was made of it. But I am often a bit slow in these things, so I never heard of the book before a couple of weeks ago.
It may sound strange, but I picked it up because I loved the title (I like bees) and the fact it is set in South-Carolina, I like stories set in the South.

Lily Owens is 14 and an average child. She is not very beautiful or very popular. She is a clever child and dreams of becoming a writer. She has a horrible secret and that is that she is guilty of her mother’s death.

Her father, T-Ray takes little notice of his daughter and mistreats her regularly. One day, Lily cannot take it anymore and runs away from home, with Rosaleen, the black woman who looked after her. The only thing Lily has is a picture of a black Mary that belonged to her mother, with the name of a town, Tiburon, written on the back.

Rosaleen and Lily go to Tiburon and are taken in by three sisters who keep bees and make honey, have a large statue of the Black Madonna in their living room and may know more about Lily’s mother.

The secret life of bees is a beautiful story full of love about a girl who misses her mother. Lily grows up when she stays with the sisters and learns about herself, prejudice, loss, grief and moving on. Lily’s voice, an unreasonable child on one hand but an intelligent girl who understands many things on the other hand, is written very well. The secret life of bees could have been sentimental and cheesy, but luckily Sue Monk Kidd managed to avoid most pitfalls.

What keeps this story above average is that it is set in 1964. In the US the Civil Rights Act was just signed, so segregation was banned, but in reality it took a lot more than that so change the situation and the black people who want to stand up for their rights had a difficult task.
Rosaleen wants to register as a voter and gets beaten up, Zach, the black boy Lily falls in love with, knows he could be killed if people saw them together.

Because of that The secret life of bees is not just a heartwarming story of a motherless girl finding a home, then it would have been sentimental and cheesy, it also shows the dark side of life; mistreatment, depression and racism and the story also gives an excellent image of that time.

Absolutely worth a read, if only for August. Everybody should have an August in their lives.