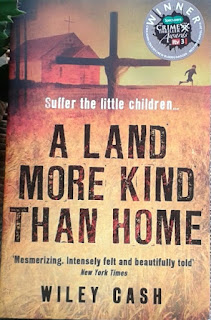 When religion is not based in tradition, but only in the ego of the pastor, things can go wrong very easily.
The evangelical church in a small town in North-Carolina gets a new preacher after their previous one dies. This new preacher changes the focus of the church. Laying hands, speaking in tongues are suddenly normal during the service on Sunday, while people dance with snakes and drink poison to show their faith.

The old lady Adelaide Lyle does not trust preacher Chambliss and does not like the snakes and other things that are going on. After an incident she makes a deal with Chambliss. She will keep silent, and in return she can take the children on Sunday, so they won’t see the other things.

Yet one Sunday there is child present during the service, the autistic son of Ben and Julie. Ben never goes to church, but Julie hopes her son will finally be healed. Unfortunately the boy dies during the service, while his younger brother Jess saw most of what happened. The people in the church close ranks and do not want to speak up, and sherrif Barefield has the difficult task to find the truth.

A land more kind than home is a fascinating book. How can people get caught up in the madness of one man? Of course you see things like that in cults, and this can be compared with that, this has little to do with normal religions.
Preacher Chambliss is a horrible man, an egotripper who thinks other people are beneath him and he is better and smarter than others. That is also his downfall, because sheriff Barefield is a lot smarter than Chambliss.

The story is told through the eyes of Adelaide, Jess and the sheriff. And when you finally put all the pieces of the puzzle together, it becomes clear there was a lot more going on that Sunday than just an accident.

The atmosphere in the little town and the connections between the different characters are well written.
My only problem is that Chambliss is nothing but a very bad man, while people who are both good and bad are much more interesting, as becomes so clear in the excellent books by Philippe Claudel.

Wiley Cash did a better job when he portrayed Julie, the mother of the dead boy. On one hand she is a good mother, but she also does things that are totally in-excusable. This is interesting and well done.

A land more kind than home was Wiley Cash’ debut, and I am glad I also have his second book on my shelves. Sometimes you read a new author and you know you need to read more.