Mr.Mac and me, Esther Freud 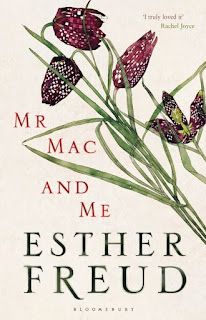 Thomas Maggs is the son of a pub-owner is a little village on the coast of Suffolk. It is a small village where nothing much happens. The men go out to sea to fish and Summer guests form a welcome addition to the incomes of the villagers.

Thomas would love to go to sea, but his parents will never allow it. Thomas likes to draw, but does not get a lot of encouragement for that either.

When WWI breaks out, there is one Summer guest who does not leave like the others. Mr. Mac and his wife stay in the village. Thomas becomes friends with Mr. Mac and even gets a present from him, a real sketchbook and a paint box to help him with his drawings.

But when the friendship between Thomas and Mr. Mac grows, the suspicion of the village also grows. Who is this stranger that claims to be an artist, why is he always walking around at all hours with his binoculars? Could he perhaps be a German spy?

The architect, designer and artist Charles Rennie Macintosh was not appreciated in his own time and in his own country. Nowadays we see the beauty in his buildings, furniture and drawings, but at the beginning of the 20th century his work was not well liked. Disillusioned he and his wife moved away from Glasgow and ended up in a small village in Suffolk.

He had contact with German artists and had German magazines in his possessions and these, among other things, had him arrested for espionage. It all ended without much trouble, but for Macintosh it had been another blow. He and his wife left England after the war, only to come back shortly before his death in 1928.

Mr. Mac and me is a beautiful story of a friendship, against the interesting backdrop of the first months of WWI in England and the effect this had on the people at home. For example, the soldiers go to the front and the first group gets a huge send-off, but as more and more groups of soldiers go, it becomes a normal thing and not a reason to organize something festive.

People were afraid for a German invasion and the government came with rules to accommodate the new situation, but those rules did not make life especially easier.

Esther Freud manages to tell a story and to make the background the background, giving enough details to make it interesting and well-researched, but not boring. The same goes for the details of the life of Charles Rennie Macintosh, for example these are told in letters, so the story itself is never broken.

Thomas Maggs tells the story and the viewpoint of this adolescent boy who does not know what to think of certain situations is very well done.

I never  read another story by Esther Freud before, but I must say that Mr. Mac and me was a beautiful book and a very good first introduction to this writer.