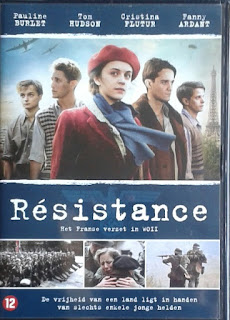 When France is occupied by Nazi-Germany in 1940, young Lili gets involved in a resistance group that operates from the museum where she works.

It begins with an underground newspaper, but soon more is happening. The Nazi’s however find out about them and the consequences are horrible.

Other friends of Lili are in a communist resistancegroup and they also take more and more actions against the Nazi’s, and Lili also gets involved with them. In the meantime, the Nazi’s are relentless in their hunt against the members of the Resistance.

Writer of this series, Dan Franck, based it on several real members of the Résistance and even a historical person like Klaus Barbie is featured. Only the characters of Lili and her father are made-up, to tie all the different groups, both in Paris and in Lyon, together.
For me, this did not matter, I absolutely loved this series and I could not get away from it; I watched all six episodes in one weekend.

Résistance is a very good French series, with a great cast. Pauline Burnet is an excellent Lili, but I also liked César Domboy as the young man she falls in love with, very much.
The war is not romanticized in this series. You see very clearly how difficult it must have been to live in an occupied land, where there is not enough food and where you have to be very careful who you trust.

Some French become collaborators for the gain, others out of fear, and some are so brave that they are able to sing the Marseillaise when they face a firing squad.

Brave decisions have to be made although the Nazi’s come closer every time and most people are so very afraid.
Résistance is a series that gives you a new respect for the brave men and women who thought it was worthwhile to risk their lives for the freedom of their country.