The year of the runaways, Sunjeev Sahota 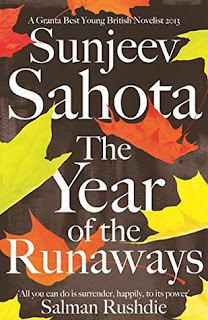 Why do people leave their homes to come here to the west in the vague hope of getting a better future? How horrible must your life be when living here in terrible conditions and doing nasty jobs counts as having a better life?

Randeep, Avtar and Tochi all came to England for different reasons and in a different manner, they all hope to built a new future.

Randeep comes from a wealthy family, but when his father gets fired, his family looses all their privileges. Luckily there is Narinder, a pious Sikh-woman who offers to marry Randeep so he can come to England on a marriage license. After a year he can apply for his own papers and they can get divorced again.
There is no real marriage, Narinder has her own reasons for this marriage but a real relationship with Randeep is not one of them.

Avtar is a former neighbor of Randeep and he is in love with Randeep’s sister. His parents own a little shop, but they do not make enough money. Avtar has to make some pretty drastic decisions to pay for the studentsvisum that will allow him to go to England, but even then he is still deep in dept. Struggling to repay the depts makes sure he will not have time to study.

Finding a job is not easy, especially since the boys are not really prepared for the new world. They end up in a house in Sheffield where thirteen of them sleep, while they work on a construction site during the day.

Tochi is even worse off than Randeep or Avtar. He belongs to the lowest caste. The caste system was abondened by law in 1931, but this does not stop the other Indians to treat these people with contempt. After something horrible happened, Tochi came to England illegally, hoping to leave his past behind. Only the other immigrants kept their mentality and he cannot escape the ideas and feelings about his background.

England is most certainly not as they imagined. There is hardly any work and they live in constant fear. They are also not a part of society. The boys are only looking for jobs to make money and forgetting any long-term goal they had in the misery of the constant struggle they live in.

The promised paradise never comes, at least not as they imagined. Some dreams do come true, but again not as they once hoped.

Sunjeev Sahoota was born in England, but his grandfather was an immigrant from India.
With The year of the runaways he wrote a novel that describes life in India without the usual romanticism. He portrays the alienation of the boys in England very well. The many Indian words, customs and the way the people interact gives it authenticity.

But for me the plus of this novel is not that is such an current topic, but that is gives you (more) understanding why so many people come over here.
Yes, many tell lies and there is corruption and fraud on a huge scale, but in some ways I cannot really blame them for trying, not when you realize how their situation at home is.

A very special novel that was on the short list for the Booker prize.